This past Friday, the marathon team and myself were invited to appear on  WBIR’s Live at Five at Four show.  It was filmed from Market Square and was right next to the ice skating rink.  Ironically, Missy Kane’s daughter was having a birthday party with 26 of her friends at the rink that day, so Missy was being both mom and marathon motivator.  We all huddled around as Beth Haynes interviewed Missy and as my family and friends tuned in from home. The team even showed off our rad dance moves by performing the “Foxxy shuffle” which was as simple as moving to the right 4 times then moving to the left 4 times.  It was a super great experience and hopefully a lot of people watching at home can realize that they too can complete a 5k, half, or full marathon. 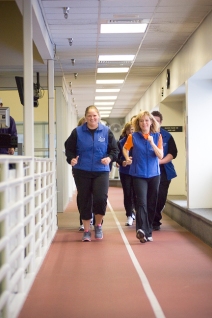 Also this week, I began my meal plan from my registered dietician, provided by Covenant Health.  Mind you, my idea of a vegetable is mashed potatoes with lots of butter and salt.  So Friday I woke up and ate breakfast, which is a rarity in itself.  I devoured some dry cereal and an apple.  AN APPLE.  It was such a big deal for me.  My breakfast was accompanied with a glass of low fat milk.  All of this is so new to me.  I’m not used to consuming strictly 1200 calories a day and eating 20g of fat per day.  But the change is good and I am feeling great about my progress.