Yesterday was back to the grind after a weekend of bad eating.  I woke up real early to watch myself on Missy Kane’s tv show, then it was up to Chesnut for hill repeats.  Great way to start a morning.  Then it was off to the gym to see Chris and Chip.  Chris really put me at ease since I arrived feeling pretty awful about my weekend, and then it was gym time!  After telling Chip about my wretched weekend of eating badly, it was a unanimous decision between the two of us that our workout was going to be very intense.  He straight up told me it was going to be torture, and believe me when I say that it was hardcore.  Chip even carried apple juice in his pocket in case I got lightheaded from burning too many calories.  Yeah, I was ready to die.  But the workout was so incredibly worth it and I left feeling great.

This morning was kickboxing with Stephanie which really kicked my butt, then I went for my final session with the lovely Barbara Foster.  They took my picture today, then printed it out and compared today’s pictures with the photos they took the day I began this journey.  The change was so immense.  Not only did my actual physical appearance change, but the clothes I was wearing.  I began this process wearing sweatpants and a sweatshirt, and today I was proud to wear cute workout shorts and a fitted shirt.  Go me.  My final meeting today was a bittersweet reminder that this process is coming to an end.  But I do not look at marathon day as the end, but rather the beginning to the rest of my life.  So pumped!! 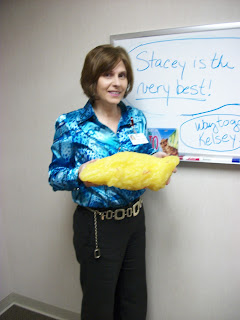 Barbara holding 5 pounds of fat!  I have lost 6 of what she is holding!