After reading this post, I just know that my phone is going to start ringing off the hook.  After a long day at work today, I got to nanny for some kids at my church.  It was their parent’s 16th wedding anniversary, so of course I said yes.  These kiddos are awesome and always willing to do whatever fun idea I bring up.  Tonight following dinner (and not a second later), we headed outside to do intervals.  Nanny of the year, I know.  We did a mile of running/walking and I thought I was dying.  Those poor kiddos. The middle child is a fitness fanatic apparently because he even did P90X with me after our mile outside.  Yay for fit kids. 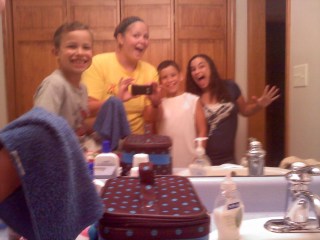 Those poor children have no idea who I REALLY am.

As if I had not tortured them enough, I had to show them my awesome Wheel of Fortune skills on the Wii.  I took home 86K in cash and prizes, thank you.  Then while watching a movie, the youngest one told me he had a loose tooth.  I tried to convince him to let me pull it with pliars, when he just jerked it out and blood gushed from his mouth.  Wow.  Oh the joys of having children. 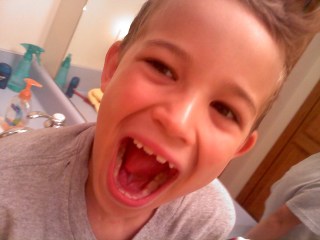 Little dude has already lost a bunch of other teeth.

Finally pulled the sucker.
Feel free to call me to nanny for you anytime 🙂