Everybody loves a good roadtrip, but throw in some best friend time and a marathon to spectate, and you have yourself a great roadtrip.

The day before the race, AL and I headed South to visit Chattanooga.  A good friend of ours lives there and we were able to meet up with him to get some shopping done and eat some world famous pancakes at Aretha Frankensteins and dessert at City Cafe.  I wish we were able to have stayed longer, but we still had to head South to get tucked in bed.  I forgot how early you have to get up for marathons. 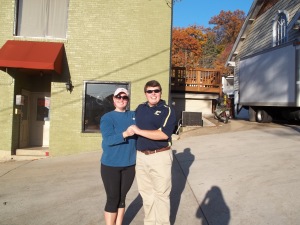 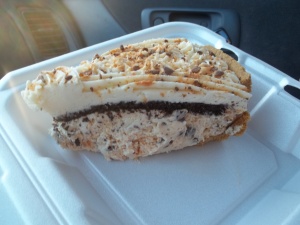 What? You don't eat a 5 inch thick Butterfinger pie as dessert?

We laid in bed for a good four hours squealing and giggling like a bunch of 11 year olds.  Waking up the next morning had some definite issues.  We made the long 2 mile car ride to the Battlefield and set up camp around mile 4, waiting to see our runners come through.  Our friend Jason won the race last year, so we expected him to be coming through first.  He did not disappoint.  Right on schedule he came flying by us looking strong.  We waited until some other runners passed before hurrying over to mile 6 in hopes of seeing them again. 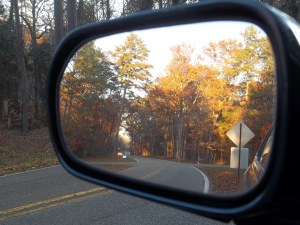 Waiting in the warmth of the car for our runners to come into sight.

My music theory professor was running it that day and we saw him three times!  He broke four hours and ran an extremely strong race!  We even got to see Vanessa from Gourmet Runner!  It was my first time meeting a blogger in real life and bless her heart.  She stopped running, ripped off her headphones and gave me a hug.  Life complete.  I was hoping to be able to meet up with her after the race, but the schedule just didn’t allow it. 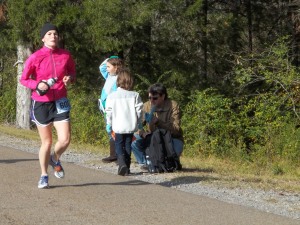 It was the perfect day to be racing and spectating.  The course was perfect for being able to get to the places we wanted to see them at and it was small enough to where our runners could see/hear us and we could see them.  It made me super excited to be running my own marathon in six months. 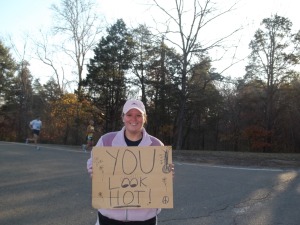 Oh, and for your viewing pleasure, here are some snapshots of some sexy runners we saw out there!

Beast of a lady. 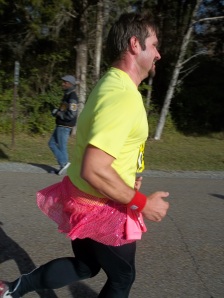 I will marry a man just like this one day.

Do you like spectating races or does it drive you crazy since you would much rather be out there running them?  Do you find it hard to travel from point to point to be able to see the runners?