There isn’t a whole lot that I won’t do for a good race t-shirt.  After volunteering as a course monitor at last year’s Whitestone 30k/Relay and seeing the amazing tech shirts they gave out, I had hoped to participate this year to score such a great piece of swag.  I was obviously not up to 30k run standards so after stalking our track club’s websites, I found two people brave enough to let me run the third leg of the relay.  I either had the option to run the 8 mile leg that was mostly flat or do a super hilly 5 mile trek.  Since I have never ran more than 4 miles without walking I opted for the challenge of tackling some tough hills over a 5 mile span.  The night before was full of nerves snce it was my first relay, so I got a jump start of laying out race day items in an effort to reduce stress the following morning.

The race was over an hour away from my apartment, so I had to wake up earlier than normal to head on over to the Whitestone Inn.  I was greeted with beautiful views surrounding the entire lodge and lots of people had already arrived.  After meeting my team and obtaining a map, I rode with our second leg lady down to the exchange point.  We had quite a bit of time to kill before our first leg would get to us, so we just braved it out in the heat of her car.  Other people weren’t as smart as us.

Can you believe this view?

My goal was to try and run the entire race.  With my increased cardio stamina gained through rowing, I was hoping I had enough in me to not walk a single step.  Let me just say how the course description of super hilly on my leg was spot on accurate.  Regardless, I pushed and pushed and drove up every hill and just tried to actually enjoy the run.  As the hills passed by (and other runners too) I realized that running could actually be fun.  My breathing was great, nothing really hurt, and the weather was perfect.  Could not have asked for anything better.

My leg ended on an extremely tough series of hills, but that made the finish line even more sweet.  Following the race, we were treated to REAL food at the Inn.  By real I mean biscuits and gravy, bacon, grits, and the whole country fixin’s.  Unfortunately I was not able to get a team photo since we were all on seperate parts of the course.  Sad times, I know.  I ended up finishing my leg (5 miles) right at 55 minutes.  Better than I had anticipated especially with a lot of hills.  Overall it was a great race and makes me want to do even more relays in the future! 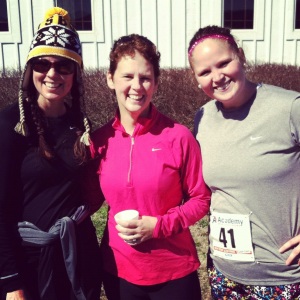 These ladies aren't actually on my team, but we had a lot of fun waiting at the exchange zone.

Tell me about your relay experience(s).  Did you have a big race this weekend?  Fill me in!