Ever sort of know someone, but only know them by association?  That’s how it was for me with my now great friend Michelle.  Her younger sister was on yearbook staff with me in high school and she became an admissions counselor at the college I started out at.  But other than that, we didn’t exactly know each other.  Last summer she ran the Midnight 8k that I volunteered at.  We said hi and went about our business but nothing much came out of it.  Then this past November she came into my work and we ended up chatting running.

After lots and lots of LONG emails sent to each other and multiple trips to see her at the office to strictly talk running/working out/being awesome we decided that we would take our friendship to the next level and become running buddies.  Hold the front door, you heard that correct.  Anyone that knows me knows that I despise running with people.  It is hard for me to talk and breathe at the same time and I always feel like I’m holding my partner back.

One of my goals for 2012 was to develop a passion/love for running.  It is hard to love something you aren’t exactly good at.  I may have completed seven half marathons, but they were all accomplished with an immense amount of walking.  Big goals usually have smaller “milestone” goals attached to them, so I’ve been working on not only loving running, but trying to run more with no walk breaks.  It has been working so far and if you’ll remember last week I actually did 5 miles without stopping.  So when Michelle said her training plan called for a 7ish mile run on Sunday, I began to sweat a little.  That would be tacking on at least 2 miles to my already lowish mileage PR.

Despite this seemingly high number, I agreed so on Sunday we met at the college to attempt the challenge that had been placed before us.  Thanks, Hal Higdon.  Even though we were going to “run together”, I had no qualms about letting each of us go our own pace.  After spending about 30 minutes using the bathroom, complaining about the cold, trying to put on the brightest colors we owned, and set our Garmin up, we were off!  The plan was to go out 4 miles on the greenway so that we were forced to do 8.  My main goal of the entire run was simply to complete it.  Walk breaks were a given so I just decided to hang back and keep Michelle in sight while going my own pace and walking when needed. 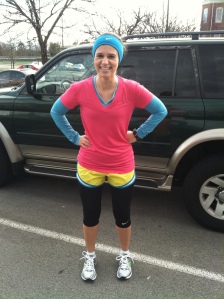 don't you wish your running partner dressed as great as mine?

Before I knew it we were already turning back.  The greenway had some construction on it so we actually went a little further than we had intended and ended up lapping and retracing certain parts.  I kept Michelle in sight the whole time and in my mind tried to visualize what mile we were at.  My breathing was spot on and with the exception of some slight lower back pain (rowing), nothing seemed to hurt.  I was feeling good and NOT WALKING.  Could not believe it when I looked ahead and saw Michelle had stopped.  What the heck, we just ran 8 miles without stopping!!  Joy, elation, relief, and several other emotions flooded me and we realized that we were still over a mile away from our cars.  Insert walking portion here. 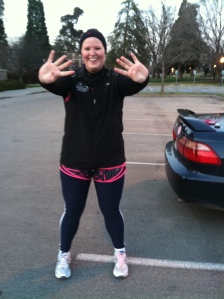 After the run it was only necessary to refuel.  Duh.  So I hit up McAllister’s and got the pick two with a French Dip and Potato soup.  My thirst was unbearable at that point so the nice clerk gave me two waters.  Customer service. 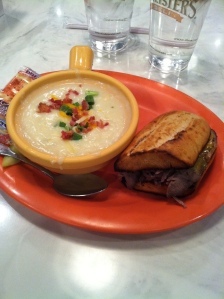 Overall it was a fabulous run that left me feeling confident and worthy.  We set out on what seemed like an impossible task and we both added 3 miles to our mileage PR of no walking.  Just to add icing to our sweet cake, we averaged under an 11 minute mile.   That  may seem slow to you folks, but in order to get a sub 2:30 half in a couple of weeks, we have to keep our paces in the 10s.  Super Sunday!  Super Sunday!  And a Super Runday!  Yay running.

So now tell me…How did it feel when you first set some personal records on running distance?  What is the absolute farthest you have ran sans stopping?  How did that make you feel?    What is your favorite thing to eat after a long (and cold) run?