When it comes to races, I prefer to stick to the road…getting dirty isn’t completely my style.  But then I got an email from Nuun asking if I wanted to participate in Muddy Buddy Nashville.  Sponsored by one of my favorite companies, a three hour drive, plus a race with my best friend?  Sign me up.

We opted for a later start time since we would be driving to Nashville the morning of the race.  Note to self:  listen when the race website says DO NOT trust your GPS directions.  We got insanely lost on backroads and stopped to ask for directions four separate times.  Eventually we ended up at a fire department to ask for help on how to get there.  Mr. Mike the handsome firefighter was so kind and even gave us their (his) phone number in case we got lost again.

After finally making it to the race we started seeing runners come down the long gravel road!  Yeehaw it is race time.  We were able to pick up our packets and drop off our bags before our wave started.  Little did I know that we were the very last wave of the whole day.  No pressure.  Ashley and I decided on the drive that this was purely for fun and that even if we walked the whole way then it would still be exciting.  Glad we made that pact since it was about 92 degrees when we started.

The course was basically a series of random obstacles-rope climbs, balance beams, climbing over walls and elbowing your way under nets.  I couldn’t imagine doing the obstacles in addition to actually racing. Ashley zoomed right through every obstacle and often had to coach me on where to place my feet/hands so having her support was really beneficial and encouraging. Eventually we made it withing hearing distance of the finish line which only meant one thing: mud pit.  This is what we looked forward to the most.

We took no prisoners in that mud pit and just dove straight in.  I was surprised to how liquidy the most was instead of being a semi solid texture.  But we made it through and crossed the finish line with a smile on our face and mud in our teeth.  By the time we made it to the shower section they were out of water so Ashley used what little water was left while I jumped in the “swimming pool”.

Overall it was a great race.  This is probably something I won’t ever do again because I personally would not get my money’s worth due to the non competitive nature of it but it was so much fun to do a race with my best friend, get a little dirty, and have some cool pictures to show from it.  Thanks again to Nuun for allowing us the opportunity! 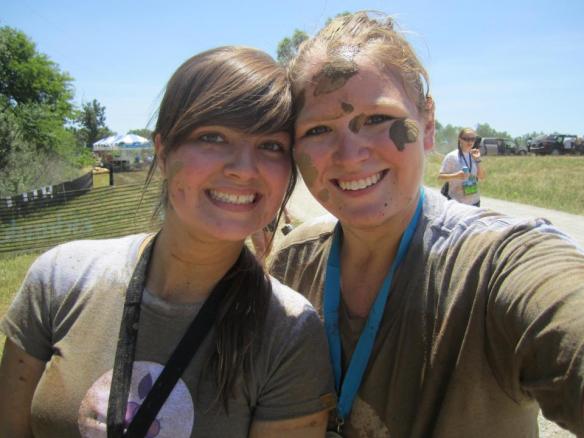