Having not done a race since September, I was itching to put on a bib and cross a finish line.  My Momma always told me that whatever you do on New Year’s Day is what you will do for the rest of the year.  What better way to kick off 2013 than to do a race then, right?  After pitching the idea to my boyfriend, he decided it was time for him to complete his first race so he signed up with me.

so proud of our bibs.

I have an intense fear of accidentally over-sleeping on race day so I made sure to go to bed around 10 last night (although I woke up for the ball drop) and then I naturally woke up sans alarm clock 27 minutes before my alarm was set to go off.  I felt very Olympic.  After seeing that it was a torrential downpour outside, I made sure to add some motivation to my morning Wheaties.  36 degrees and pouring rain ain’t gonna stop me from starting my year off on the right foot.  Pun intended.

Luckily it was only a three-minute drive to the race site.  We parked next to my sweet friend Robyn and made the trek to the restaurant that was hosting packet pick up.  I was actually surprised at how many people had turned out to run in the freezing rain.  Go runners!  My friend Brittney was a tiny bit late so we grabbed her packet for her and met her back at the car.  After some photos, we were off to the start line!

After some intense start line deliberation, the four of us decided that it was best to simply focus on finishing this race.  No time goals, no set pace.  Just run and walk when you need to.  We wished each other luck then split up.  Brittney and I lined up in front of the walkers and behind the runners so we wouldn’t have to start out fast and still wouldn’t have to bob and weave.

The gun went off and we didn’t start running until the actual start line.  Strategy.  A little before the one mile mark, I needed to take a walk break.  I told Brittney to go ahead without me but she was a trooper and stuck with me the whole time.  We only took four or five walk breaks which was good given my current lack of “in shapeness”.  It felt like I was exerting so much effort but my pace was not reflecting it and that was a mental struggle.  But having a partner in crime really kept my mind occupied and it was nice to have a running body.  After the turn around, we saw Robyn getting her run on behind us!  So proud of her for getting out there when she will gladly tell you she would rather be in bed.  We just kept on running at what felt comfortable for us and that’s all we had hoped for.  By the end of the race, Brittney’s Garmin was going crazy and I was dripping sweat and rain from all parts of my body.  Good race.

Overall it was a great race!  My third year running it and always a great way to start the year.  I’m so happy to have had my running friends there to share in the fun and happy that my boyfriend did his first race and already has the running bug.  I can’t wait to do this race again next year and see how much time I can knock off in 2013. 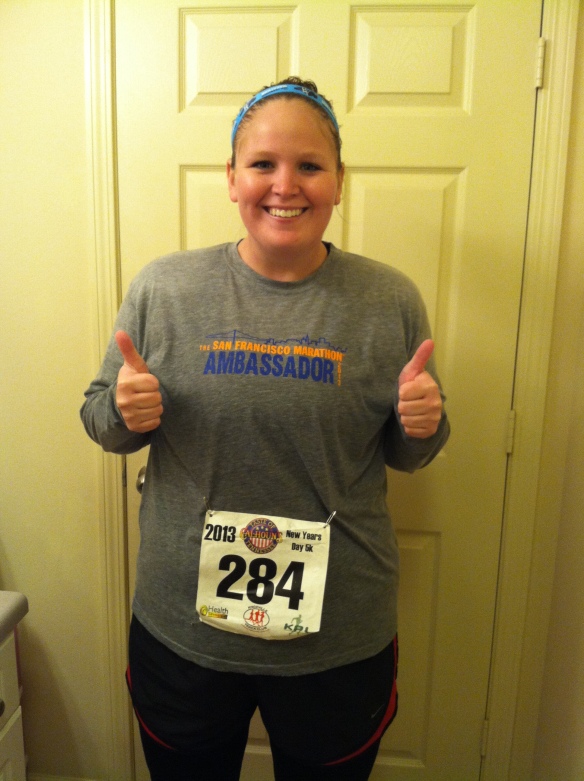 repping the SFM shirt which is usually a much lighter gray. thanks, rain.

After coming home from the race and thawing out in a hot shower and taking an extremely long power/recovery nap, Momma and TJ woke me up to inform me we were all going to go walk.  So we were able to get in another 3.1 miles post race in the dark and in a light drizzle.  Yeah, really starting the year off right.  Cheers to a fresh start and new beginnings. 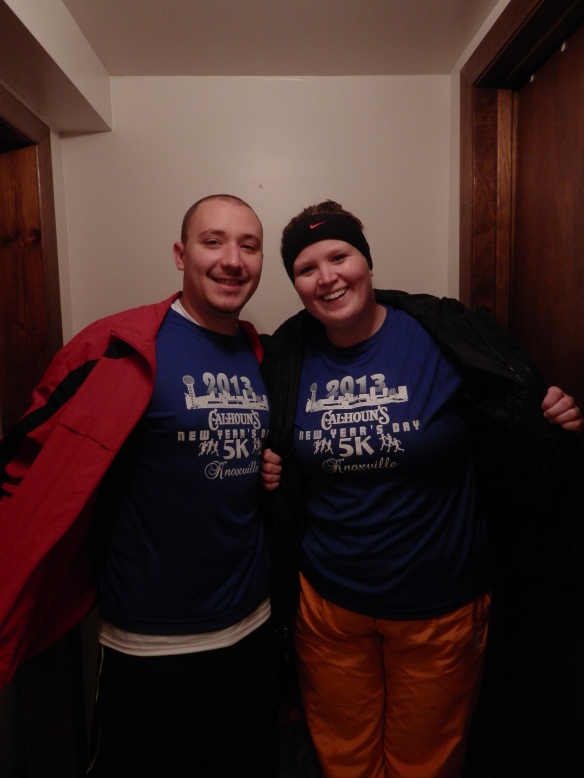 the only reason to run a race: the shirt