On the first day of grad school, we had to stand up and talk about ourselves.  Of course I had to be that girl who talked about how fun running is and how I love half marathons.  Later in class this really  nice woman told me that she enjoys that stuff too and used to be into doing triathlons.  She even told me she has done an Olympic distance tri.  At the time, I congratulated her and thought she was awesome for accomplishing that but I never thought much more about it.  I did a sprint triathlon about 4 years ago before I ever lost weight.  I came in last place and swore I would never even think about it again.  I hate biking and swimming is meant for lazy lounging in the river…not getting kicked in the face.

Last week I was reading a blog where a girl did a tri and my mind got to ticking.  After a few texts to the woman in my class and some research I found a triathlon.  There is a local sprint tri in Knoxville the weekend of my birthday and it is on my alma mater’s campus.  Perfect fit.  It is 400 meters in a pool, 6 mile bike, and a 3 mile run.  If I could do one with no training and come in last then surely I could at least finish smiling if I have four months to put the training in.  We’ll see.  It makes me incredibly nervous and I’m purely doing it to “try something new” and not to actually get super into it.  Running will always be my number one but I think it will be good for my body to try something new even if it is just for a few months.  There will be lots of posts about my training and hopefully some of y’all can offer expert advice for this novice.

Yesterday Momma and I hit the gym for a workout.  We decided to do a reverse triathlon to “shock our bodies” and try something new.  We started with a three-mile walk around the gigantic track that surrounds the gym’s perimeter.  Following our walk, we spent some time on the spin bike. By the way, spinning is hard.  This will probably be the hardest part of the triathlon for me especially since most of my training will have to be on a spin bike.  After some time in the saddle, Momma spent some time doing free weights and I hit the pool.  Warm water was a welcome relief but I was a total klutz in the pool.  I ended up swimming laps and alternating between breaststroke (probably did it wrong) and freestyle.  Some laps I would only use my arms and others I would only use my legs and then of course I would combine the two.  I ended up swimming a 1/2 mile and it was awesome.  Swimming obviously isn’t my forte but I will learn to enjoy it.  At least the water is warm.

step 1: feel happy in a swimsuit

After some time spent relaxing in the gym hot tub and getting ready at the gym, Momma and I were off to Channel 10 WBIR for her big TV debut.  The Biggest Winner team had a slot on the Live at Five at Four show as part of their publicity for the Knoxville Marathon.  It was so great to see her teammates and chat with them for a bit.  We also love WBIR so it was interesting to see behind the scenes (again).  The entire team and coaching staff were able to get some TV time and Momma got a special shout-out for being the daughter of a previous Biggest Winner.  The best part was coming home and watching it on our own television because Momma had gave a big tug on her ear as a way to hi to her friends and our family who were watching.  I swear we laughed for an hour about that. 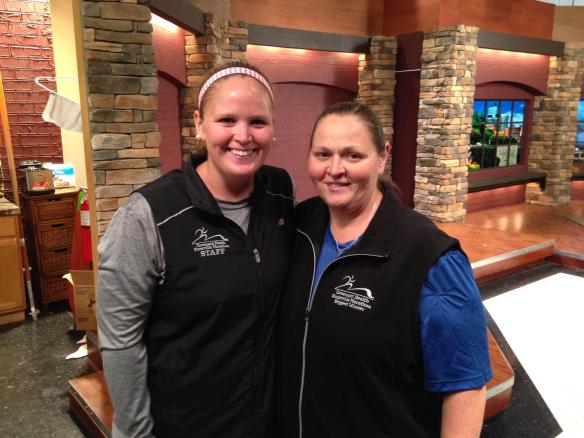 on set at WBIR

That’s about it for this Friday.  Hope y’all have a great weekend and get lots of running in!

Any advice for a newbie triathlete?  Do you like to swim?  Have you ever been on television?