Yesterday the nation observed Martin Luther King Jr. Day and a lot of people were off of work.  Since I attend a public university, we were also out of school.  My former Biggest Winner friend Bryan sent me a message asking if I wanted to go run Cades Cove Loop.  Of course my first questions included which route we were taking, what time, and what pace.  He assured me we would take the 8 mile loop option and go at a slower pace.  He also informed me that after we ran we could meet up with some members of the BW team and our coach, Missy Kane, to do a hike.  It sounded daunting but I willingly agreed.

Yesterday morning I bundled up and headed up to the Cove.  I did not see an entire car the entire time which is extremely rare for the national park.  I was able to get some dynamic stretching in so I was pretty much already bundled up before we even started.  The loop is gorgeous no matter what time of day or year it is but it was especially beautiful yesterday.  We were running a fairly solid pace and chose to walk up the hills.  It felt so great out and I never got cold again once we started.  It was nice to have some views to go with the run and then also have guaranteed walk breaks.  I never really looked down at my watch that much but I was grateful we were only doing 8 miles instead of the usual 11 mile option.

My breathing was on point and I was able to talk almost the entire time which basically never happens.  We saw a few cars and they all smiled and waved which is also highly unusual.  Before we knew it we had less than a mile to go.  Around that time we ran into Missy and some of the team members and told them we would meet them at the trailhead.  We had to go an extra point one so that our run equaled out 8.1 miles for our run.  Even though we walked some of it, I still felt satisfied with the effort and I’m looking forward to running it faster. 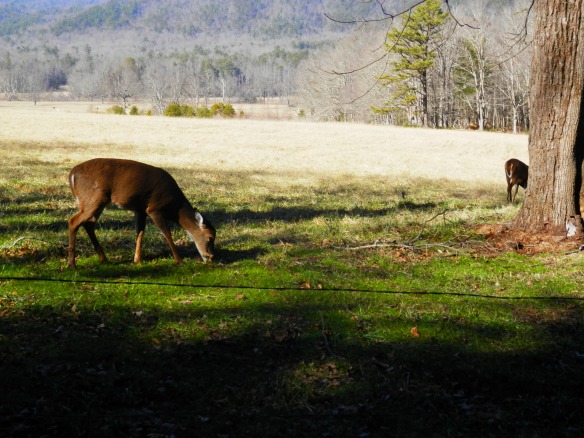 The bathroom I changed in was heated which is a RARITY in the national park.  Thank goodness for it.  After getting dry we headed up to the trailhead for Abrams Falls.  After some group pictures we were on our way.  My legs felt awesome and I was glad to be getting five more miles in.  Bryan and I stayed towards the back with our team members.  I tried to be motivating by telling them how far we had gone per my Garmin but that seemed to have the opposite effect since very often when hiking the distance you *think* you have gone is very different from what you actually have.  We made it to the falls and got to sit down and hang out for a while.  The water was fantastic looking!

On the way back we decided to get ahead of the group and just head back to the car.  Our poor legs were tired and we were ready to get some food and get home.  Once we got back to the parking lot we had to make a big loop around the parking lot to make it an even five miles which ended the day at 13.1 for us.  Holy cow, we did a half marathon on our off day.  I went home and piled up on the couch and did not move except to go to the bathroom.  Laziness at its finest. Surprisingly this morning I wasn’t even sore and I was able to get in two miles at the indoor track at the gym followed by a kickboxing class.  Roundhouses are just what my legs needed today.

As I have mentioned before…one of my lifelong goals is to run a half marathon in every state.  Some people share this goal with me and some people have already done it or are really close to having all states completed.  I saw yesterday that ZOOMA race series is giving away an all expenses paid trip to Napa, California for one lucky blogger AND one of their readers (that could be YOU).  It is the chance of a lifetime and it would be so nice to win PLUS take a very special reader.  If you get a chance, please head on over and vote for me on their Facebook page.  You are allowed one vote per day so check back and vote again. Bonus points if you share with your friends.  Seriously, winning that trip would not only allow me to knock California off my list but I could take a wonderful reader with me and be surrounded by so many inspiring women.  Thanks, ZOOMA for hosting this!  Head on over and vote for me…you’ll see my picture and the name Kelsey/Go Girl.  Thanks so much, y’all.