Here we are again at the end of another exciting week.  I hope that you all have had a great week and that you are staying warm…it sure has been cold here in the South.  Tomorrow I am racing a 10k and could not be more excited.  Hopefully I can come away with a new PR but the ultimate goal is to just have fun and enjoy supporting so many other runners and walkers.

This has been a great week of training.  From a super hard spin class and run to start the week off to a great set of sprints midweek to over 1o minutes of planking and my first real push up, I would say that it has been successful.  I won’t bore you with all the nitty gritty details, but I feel so accomplished this week and know that I have pushed my limits.

Allow me to share what happened Monday.  I had some unexpected free time so I went to a noon spin class that lasted an hour and a half.  It was an interval class and my heart rate was all over the place and my legs were jello after.  Remember that triathlon I’m doing in April?  …yeah well I figured that was as good of time as any to get in some practice for it so I decided to hit the track after for a 2 mile jaunt.  The goal was to simply log miles but I ended up surprising myself an astronomical amount and finished it in 18:44.  That’s about three minutes faster than I would’ve even hoped for.  Seriously, I was so amazed at that time in general but especially after a tough spin class.  That was my win for the week.

You may notice that one thing I say a lot on this blog and on social media in general is to do something that scares you.  I live by that but it wasn’t until this week that I truly reflected on it and was challenged by it.  Tuesday night while our Biggest Winner team members were in a life coaching session, my fellow coach and mentor, Bryan, decided that we would do a really tough workout that included quite a bit of abdominal work.  We had made it through a circuit when he said it was time for push ups.  Umm, no.  Nice try, but no.  Push ups are my nemesis and I have never been able to do a “real” one.  Bryan encouraged me and we started small.  As I was doing them, I thought to myself how scary it was.  Then I actually verbalized the thought that I only do things that scare me when deep down I think I am truly capable of them.  Push ups don’t fit that quo and I was even more afraid.  But you know what?  With a little help, I actually did one.  If it wasn’t for him telling me I had actually done it, I would not have thought so since I hardly even bent my arms.  But I did a real push up and then I went on to do two more.  Scared the living daylights of me but I did it.  Looking back, I realized I was more scared of failing than I was of the actual task at hand.  The only failure is not trying.  Positive lesson learned on the gym floor.

Another great thing this week?  The Biggest Winner team all had a loss for their monthly weigh-in, including my Momma!  Love watching these people change their lives.  It is a long process but the rewards are well worth the work.  Proud of all of them and proud of my Mom!! 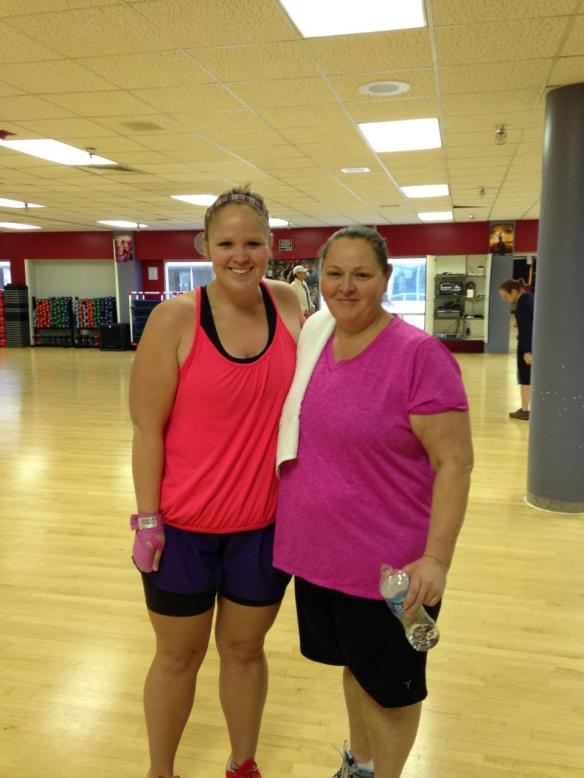 Oh, and can I just say how thankful I am for this blog and the people I  have met (both in person and via the internet)?  It is crazy how many connections I have made and how many people out there have so many common interests and goals.  I met one of my best friends Brittney through blogging and last weekend we were lucky enough to get together for a double date night with our handsome men to a local hockey game.  Another wonderful friend snagged us some VIP seats down low next to the ice and they were phenomenal seats!  These are basically the only photos we have together NOT in running clothes. 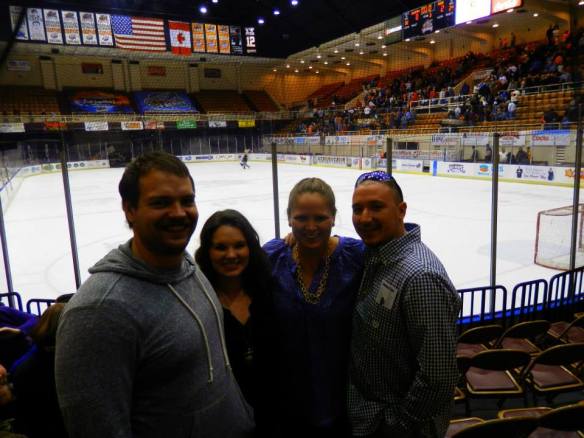 Happy Friday and I hope y’all have a great weekend.  Good luck to everyone who is racing or doing any kind of mileage!  Don’t forget to cast your vote for me (and one lucky reader) to get to go run Zooma half marathon in Napa, California.  I’m pretty far away from first place but it would be nice to end up in top 5 🙂  Thank you all!!

13 thoughts on “Another Week Down”