Two years ago I did this race to celebrate my birthday and ended up getting a hefty PR.  So when the race feel the week of my birthday again I threw the idea out to Brittney and Coach Bryan that we could make this our spring goal race while the weather was still ideal and use it as a little pre-celebration to my birthday.  While we didn’t officially set an actual time we had hoped to run it in, both Brittney and myself had the goal of PRing which would be anything below a 28:36 for me and 28:10 for her.  We had both put in the hard training and while we hadn’t specifically trained just with this race in mind, our bodies were prepared to give it all we had and leave nothing out on the course.  I will be honest in saying we were hoping to have anything in the 27 minute range.

The day before the race I had some serious stomach issues and got very ill at school.  I texted Brittney while laying out in the middle of the hallway with my legs up the wall trying not to pass out and told her that this had better go away by the next morning.  Luckily for me I felt better as the day went on and I was ready for race day.

Race morning wasn’t super eventful.  I ate my usual breakfast of toast and peanut butter and then met Bryan and Brittney at the race site.  It was a smaller crowd and I was thankful to see some familiar faces and get some socializing in while attempting not to stress about what we were about to embark on.  Brittney and I chose not to wear our Garmins and to completely trust Bryan who would be pacing us.  The goal was to run consistent and even splits and then have a strong finish. After getting to the start line we realized we would have to line up fairly close to the front due to no chip timing.  This wasn’t really a problem since it was a smaller race and I never got the feeling that we were holding anyone up. 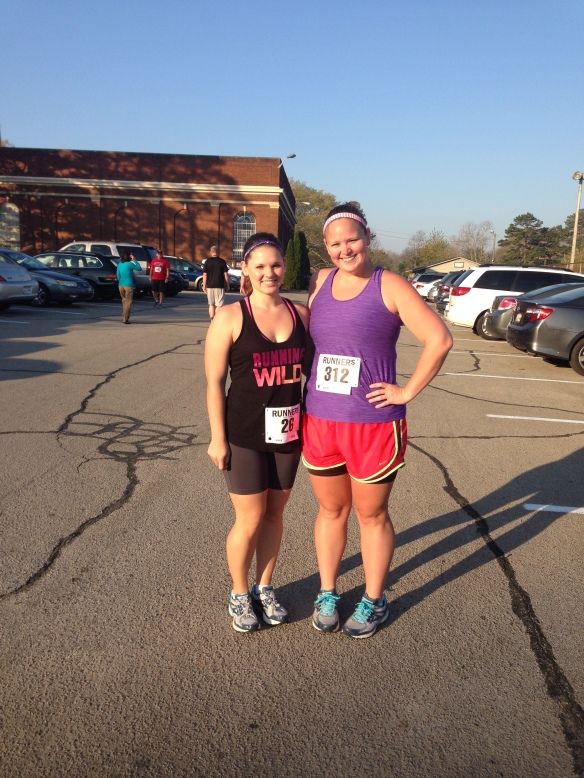 The course started out going directly up a long incline.  It wasn’t steep or anything but it was definitely an incline.  My favorite part about this course in particular is that it is held on the entire street so basically the course is wide open meaning little congestion.  We took our time getting up the hill and both of us commented how the pace felt a lot easier than we had expected.  It was nerve-wracking not wearing a Garmin but I completely trusted Bryan and also took lots of joy in passing some other people.  The first mile really did fly by because after what seemed like two minutes of running we hit the first water stop and the timer called out 8:55.  We were right on pace with even a little time to spare and I was ecstatic.  Slightly after that we made our way up the biggest hill in the course and I began to struggle.  Bryan reminded me that we had a downhill after it and a lot of flatness but it didnt’ help as much as I thought.  We made it up and then right around the halfway mark I lost focus.  It may have been the distress of a 7-year-old hysterically crying that threw me off but I just lost the groove and fell back.  It was completely my fault and I just watched as Brittney and Bryan seemed to get further and further away.

Prior to the race we had told each other that if one of us fell back that the other would keep going no matter what.  We also decided that even if both of us fell back that Bryan needed to maintain the pace so we would know where we were at in terms of being behind.  I tried frantically to catch back up but there was no hope.  The caller at mile number two called out 18:36 which wasn’t terrible but definitely not where I wanted to be.  I was actually surprised I had still gotten there that quickly despite the walk breaks I was forced to take.  Even though I knew a PR was basically out of the question at that point, I reevaluated my goals and decided to shoot for a sub 30.  It was around that time two years ago that I got sub 30 for the first time and it was the greatest feeling of all time.  The last time I had gotten any 5k race below 30 minutes was June 2012.  Quite some time ago.

I slugged through the final mile and came to the turn that led to a long straightaway finish.  I didn’t feel strong but I didn’t feel completely depleted either.  I couldn’t see what the race clock said but Bryan came back for me and told me I needed to push it to get under 30. Push it, I did.  Final clock time was 29:53 which was a sub 30 and I should have been happy.  That final kick took everything out of me and I walked out the finish chute and just laid in someone’s driveway.  I’m not sure if it was disappointment or just an overall emotional high from the race, but tears just poured out of my eyes.  I couldn’t make them stop.  Internally I knew I looked ridiculous and had absolutely no reason to be upset but I literally couldn’t make it stop.  Bryan and Brittney ended up finishing in 27:33 which was obviously a huge PR so I was super excited for my sweet friend even though there was that slight thought that I could have had a PR of over a minute had I been able to stay with them. 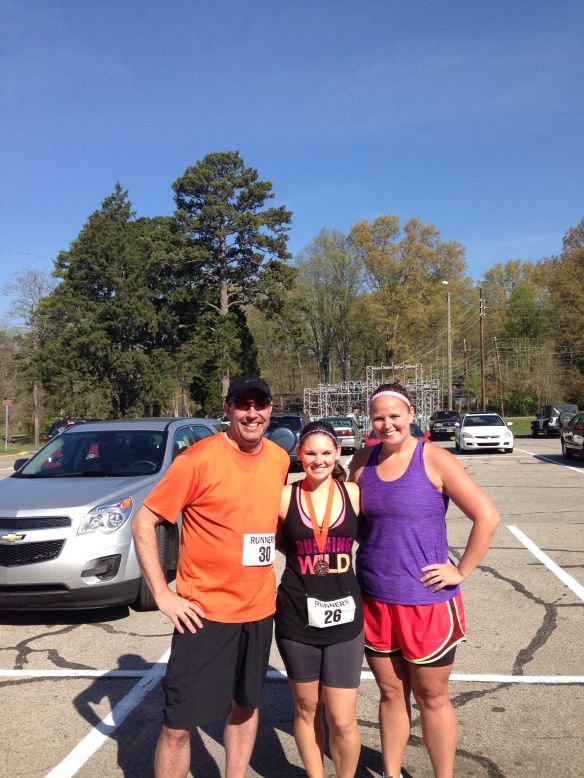 They had amazing post race food and I ate one of those chocolate mini-donuts.  It was lovely.  We stuck around for awards/door prizes and it was a good thing we did because Brittney actually placed 3rd in our age group and won herself a  nice little medal!  So proud of her.  Even if the race didn’t go as planned, I’m so thankful to have run a 5k in under 30 minutes and it can only get better from here.  I’m excited to see where my training takes me next.

Oh, and after the race we spent some time at Neyland Stadium for my alma mater’s spring football game.  It is dubbed the Orange and White Game (our school colors) and it is basically a scrimmage to get fans excited for the most exciting time in the South…fall football!  It was a beautiful way to spend the afternoon!