Happy Monday to my Internet friends (or lack thereof).  What an exciting start to October we have had here in Tennessee.  I’m not sure what the weather is like where y’all live, but it is pretty freakin’ rad here in the South.  Fall is officially here and I could not be any more excited about it. This is going to be a very busy month for this Go Girl.  I just ended my first student teaching placement at a middle school and I am now completing my new placement at the local high school.  It is a brand new adventure and quite scary at the same time but I am thrilled to have the opportunity to learn from veteran teachers and really hone my teaching skills.  On my last day we had a big celebration complete with presents, pizza rolls, and a binder of letters that students had written to me.  A student gave me a box of Smarties and originally I thought they were traditional Smarties in a box but I was so wrong.  A Canadian client that works with his parents sent them a shipment of them and he decided to share with me.  They are basically Canadian M&Ms but they were so tasty and I was honored that he thought of me to share with.

I completed my first 15k this past month which was a scary experience.  It ran right through my little town and had an endless amount of hills but the views were incredible and so were the attitudes of other runners.  In my experience on out and back courses, the people in the front tend to not say anything to those of us who may be in the middle or back pack.  This was absolutely not the case this time and almost every single runner I encountered said “good job” or offered some sort of encouragement.  Things like this is why I love the running community.  Around mile 8 I passed my Momma’s work and she was outside holding a sign and cheering for me.  It was a nice relief to see her and her support helped me through the final mile.  Since no one else in my age group decided to show up I was able to win my age group as I was the only participant.  I really didn’t mind and took home a nice water bottle as my prize.  My final time was 1:47:04 which averaged out to a pace of 11:30 which I was very proud of.

A week later I was able to return the favor and cheer on runners at the inaugural Great Smoky Mountains Half that was put on by a company called Vacation Races.  This course also ran right through my small town and I sort of regretted not signing up for it but I enjoyed cheering so much more.  I had two cowbells and two signs and tried my best to be a source of encouragement right at the 12 mile mark.  It is always appreciated when people cheer you on in the final miles of a hard race and this race didn’t have a lot of spectators so I felt that it was my duty to provide free high fives to any willing person.  If you ever get the opportunity to either spectate or volunteer at a long distance event then please do because runners really appreciate it.

We also attended to Old Timer’s Day Festival here in Townsend and ate all the festival food you could imagine.  My handsome fella splurged on a big turkey leg while I had a snocone and BBQ sandwich.  The elementary school that I went to growing up has an annual scarecrow auction as their fundraiser.  Lots of locals like to come and bid on these since the money goes directly to the classrooms and eliminates little kids from having to sell candy or other junk that nobody needs or wants.  We were very impressed with the creativity that was used in the scarecrows this year and it makes me nostalgic for those days when it was my class’s scarecrow being auctioned off. 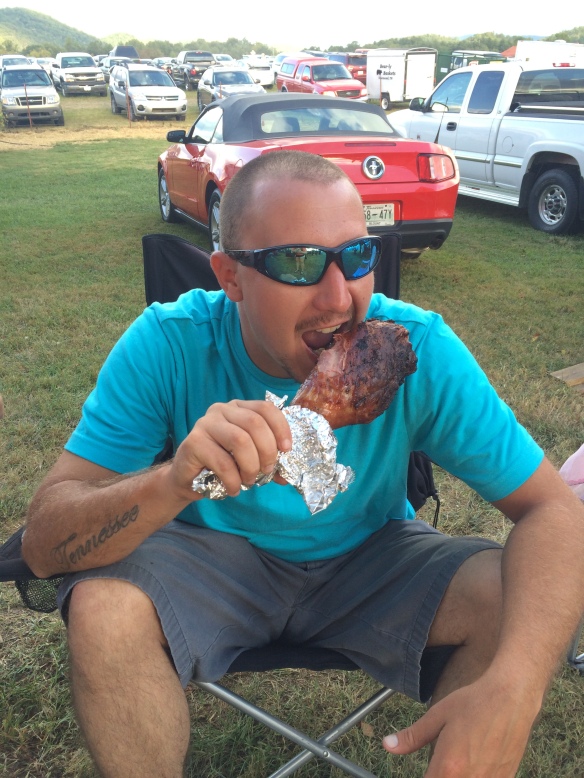 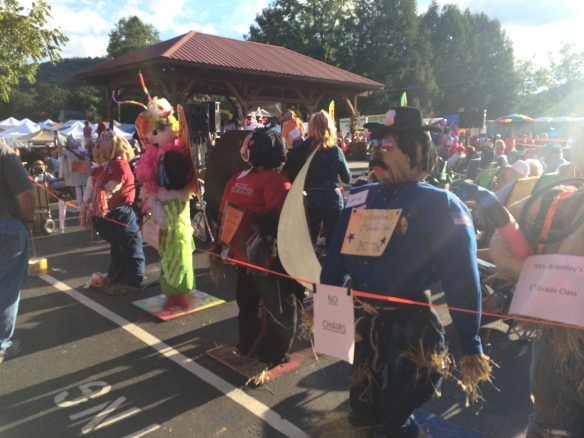 I’m looking forward to an exciting month ahead that includes a half marathon or two (or three) plus a mini vacation to the beach. Tennessee football games are also at the top of my list in October.  It will be exciting to head into November with fall racing under my belt before I begin training for my next big beast.  But I will save that for another post.  🙂   I hope everyone has a fantastic Monday and that you have a great week!

Have you ever had candy from another country?  What is your favorite festival food?