I read a lot of blogs of various people who are racing the states so it is not uncommon to see someone do two half marathons in one weekend.  Although it may be somewhat common, I have never even considered doing a double since that seemed like suicide to my poor body.  This past spring, our local track club announced an inaugural half marathon that would take place in November.  It would be the Farragut 13.1 and would run through a different part of town that Knoxville’s main marathon.  I love supporting our club and our running community so I could not pass up the chance to participate in an inaugural event.  After registering, it was announced that a neighboring town would be offering a half marathon the following day and that there would be a special medal for anyone who chose to run both.  This race was called Foothills Half Marathon and the course was primarily greenway.  Two great races and extra bling?  Sign me up!

After registering, I put these races on the back burner.  I knew there would be no way that these two races would be comfortable so I vowed to do them for fun.  Race weekend quickly approached and I began to doubt my ability to complete in two half marathons in consecutive days.  On Halloween, my Momma and I headed to Knoxville to pick up race packets.  She was originally registered to run but has had some knee pain lately and decided it wasn’t worth risking injury.  The host hotel had a nice little mini-expo and we were able to pick up some samples of things. Each participant got some nice swag in their race bags including free appetizers to Texas Roadhouse and free chili from Petro’s.  The shirts for both races were also very nice and unique.  We made a quick trip to the mall before heading home so I could get as much sleep as possible before race day. 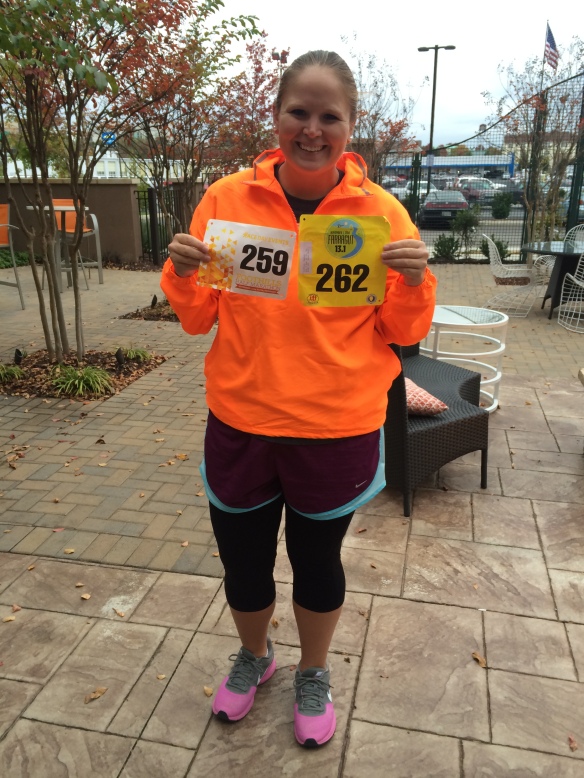 The Farragut 13.1 had a 9am start so I was lucky enough to get a little extra sleep before getting ready for the race. Earlier in the week, the meteorologists had called for snow so a lot of people were concerned what race day weather would bring.  We were fortunate enough to only get a light dusting on our cars but some of my coworkers had over a foot of snow at their houses (no exaggeration).  The wind was blustery and was cold enough to really make you shiver.  There was a big turn out for the race and it was very well organized although I was glad we picked up our packets the previous day.  I didn’t have a goal in mind but just wanted to finish so that I could get through the entire weekend. 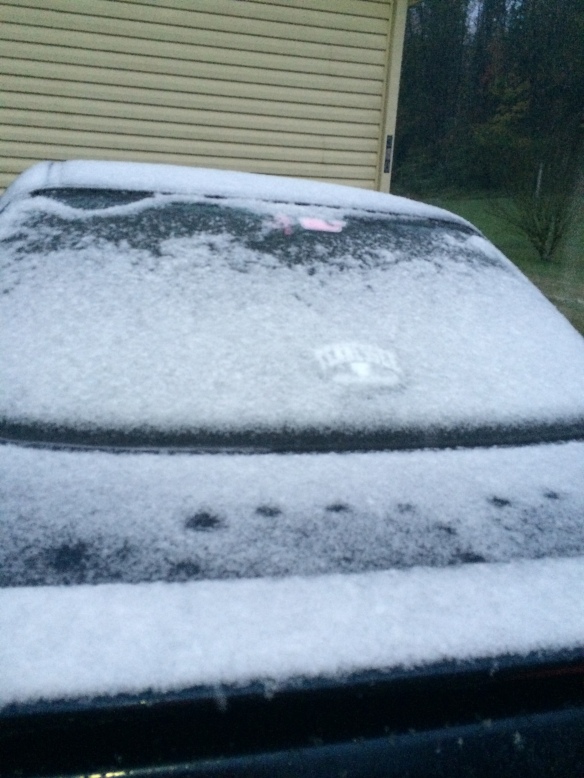 I made it comfortably through the first three miles at a consistent pace but the hills began to wear me out and I took a lot of walk breaks.  So many other runners were very supportive so it was nice to socialize while out there suffering.  I ran when I could and walked when I ran out of breath or when my legs were starting to hurt.  I made it to the 10 mile mark just under two hours which was the only original goal I had set for myself.  Around mile 11 I completely bonked.  My legs refused to move forward and we were running on a cement sidewalk.  It became impossible for me to push myself mentally but I just kept the goal of the end in mind.  Finally I could see the hill that led to the finish line and I powerwalked my way up it.  There were lots of cheers from the sidelines and I was thankful for that since it gave me the strength to run the remaining tenth to the finish line.  My chip time was 2:43:26.  Not close to my best but far from my worst.  Bryan met me at the finish line and could tell that I was obviously in pain.  We headed to the food area and I was able to get some pizza, donuts, chocolate milk, BBQ, and chili.  It was the best post race food of all time.  And after a freezing cold and painful run, it tasted wonderful. 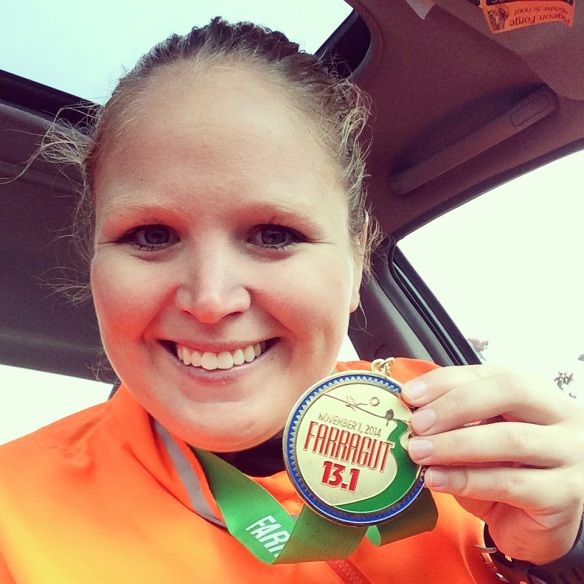 After a brief chat, I was able to head home to recover.  I stopped by the grocery store for a few items and to buy a foam roller.  Once at home, I took a nice hot shower to thaw out and then put on some compression sleeves.  I wasn’t really in pain, but my body was tired. I had Chick-fil-a for dinner and just lounged around for the rest of the day and into the evening.  My beloved Tennessee Volunteers were playing football that night but I could not even manage to stay awake for the miraculous overtime win. 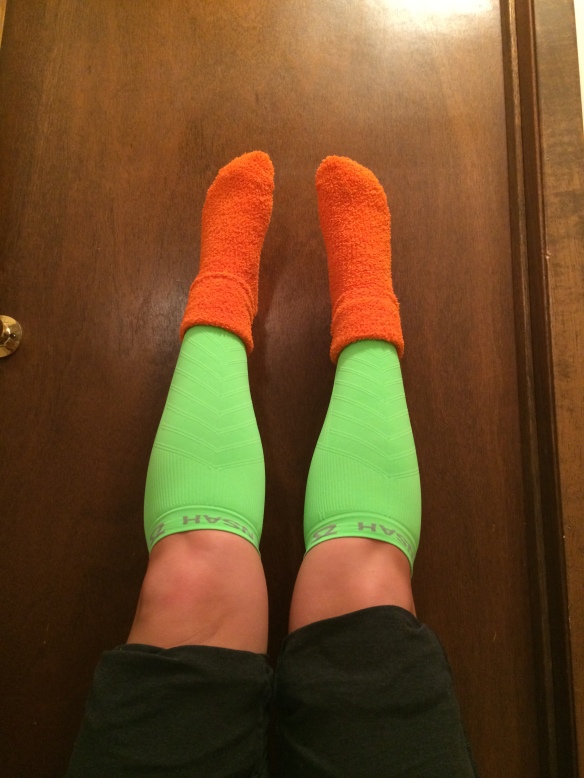 Daylight savings time became my instant best friend since I got to sleep so late the following morning.  The Foothills Half started at 2pm so I enjoyed being able to sleep in, take it easy, and mentally prepare myself for the second race.  I woke up a little tight, but nothing compared to what I had anticipated.  This race was a lot smaller and we were able to park directly next to the start line.  I will complain that this race had ankle bracelets for timing chips and those have chafed my ankles pretty badly in the past so I improvised and attached it to my shoe.  I found a group of ladies that I had done some long runs with in the summer and decided I would stay with them.  They were doing a 3:1 run/walk ratio and that was exactly what I needed to get through this race.  We were moving along and I was feeling great.  I told the lady I was running beside that I couldn’t believe it felt that easy.  The course monitors were so supportive and helpful at every crossing. 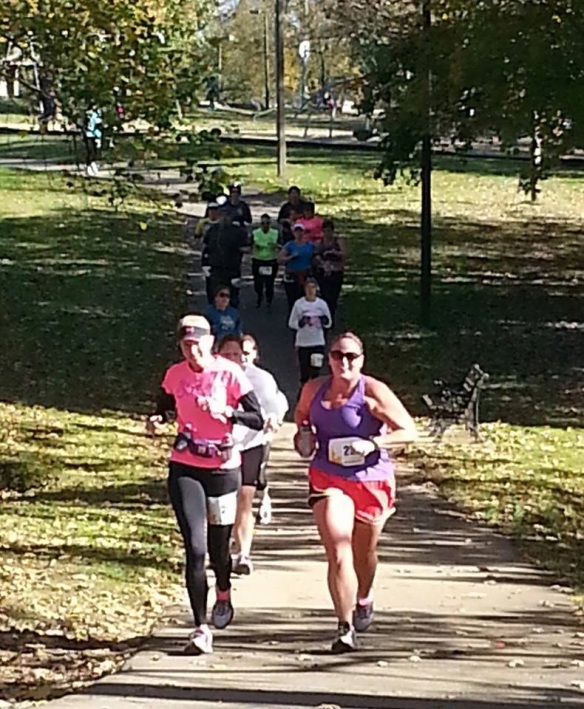 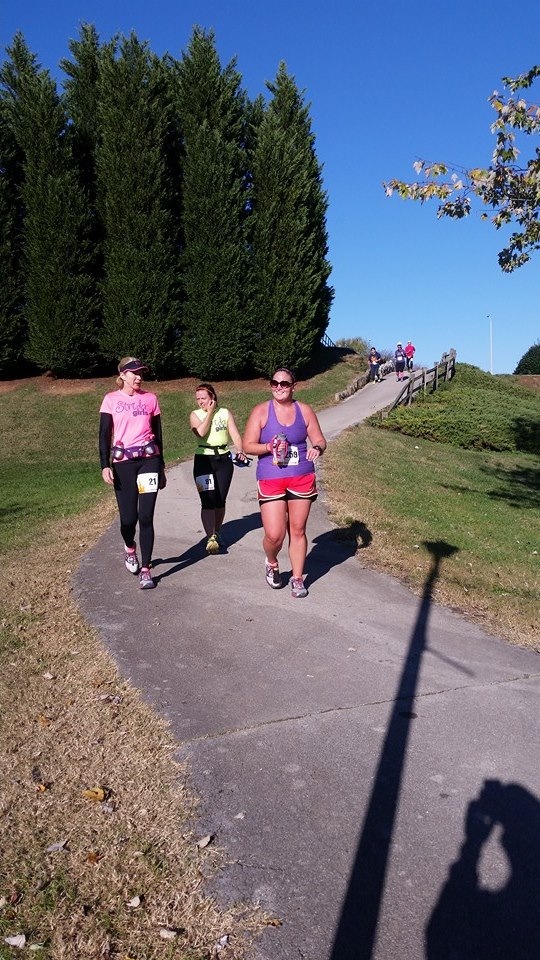 A bit into the race some of the group I was with had to take a bathroom stop.  Another lady and I continued on but the other group had the interval beeper so we decided to just run until we were ready for a walk break.  This continued on for the next several miles.  Around mile 9, my legs really began to feel the extreme fatigue.  It actually hurt worse to walk than it did to run.  We made it across the big pedestrian bridge that crosses to a new section of the greenway and I told my partner to go on without me.  From then on it was a mental struggle but I had approached those who chose to make the early start.  I made it my goal to start passing people and it kept my mind off the pain and fatigue I was feeling. Before I knew it, I was approaching the finish line.  The path to the finish was a nice straight downhill finish and there were lots of spectators and supporters lining the greenway cheering for finishers.  My finish time for this race was 2:46:27 which was only 3:01 slower than the day before. 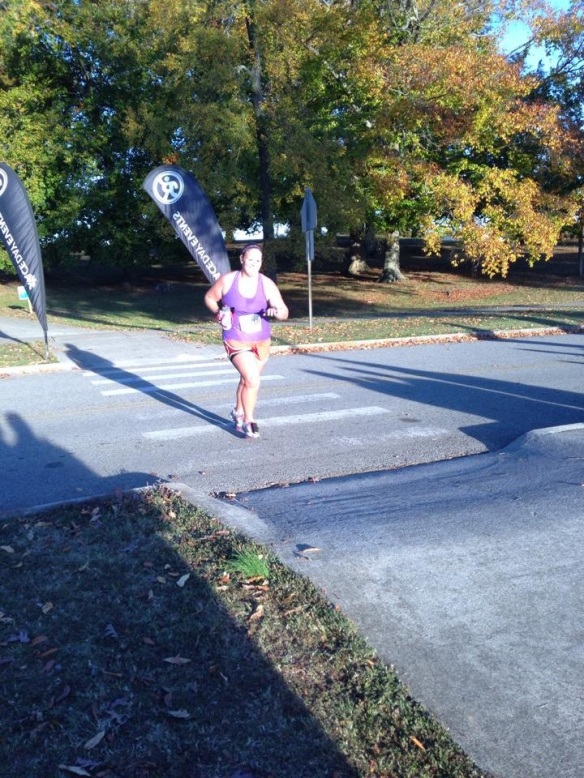 Once I finished and collected both my finisher’s medal and my double medal, I was able to grab some food.  They were serving grilled cheese sandwiches which was DELIGHTFUL after a race, plus some chocolate milk.  Surprisingly I felt superb.  My legs were definitely aching but I felt so much better than I did after the finish on the prior day.  Maybe it was the adrenaline, but I did not feel dead to the world.  Once the sun started to go down it got pretty chilly so we took some photos and I headed home. 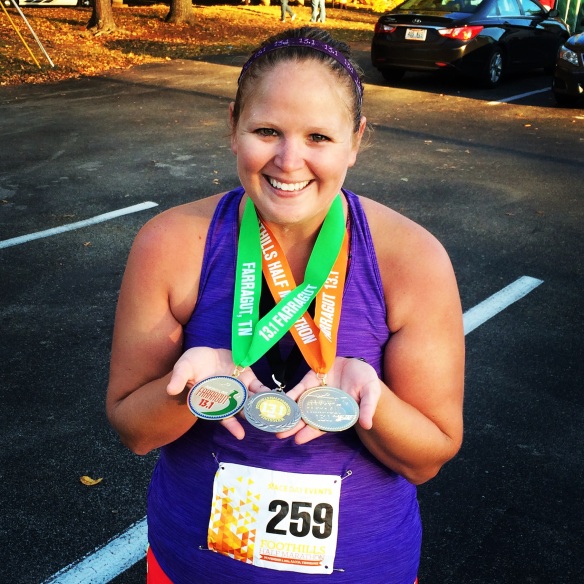 I was starving last night since I wasn’t really able to eat that much before or after the race so I ordered myself a nice pizza and some cinnamon sticks.  Delicious.  After a hot shower and some Tylenol, I was more than ready for bed. This is probably too much information but I now have a lovely black toenail which I’m pretty sure is going to fall off but in some bizarre and morbid way I am glad I have it because that means that I worked hard.  I woke up in the same exact position that I fell asleep in which is absolutely not normal for me.  I woke up this morning feeling a little sore but great overall.  Today and tomorrow will definitely be a rest day and I will continue to focus on recovery before starting training again.

It is hard to believe this big goal of two half marathons in one weekend is already over.  Reflecting on this weekend, I have decided I would definitely do another double weekend which is a good thing since there will probably be more doubles involved in the future if I plan on racing every state.  If you have the opportunity to do a double weekend then I would highly recommend it…especially if extra medals are involved.

12 thoughts on “Doing the Double: Two Half Marathons in Two Days”