When I was in 2nd grade, my sweet Momma traveled to San Diego to participate in the Suzuki Rock n Roll Marathon for Team in Training for the Leukemia & Lymphoma Society.  This was at a time when the running boom had yet to really take off.  I didn’t fully understand what she was doing or why she was doing it, but I knew that it was something special and something that not a lot of people had done. She had completed a marathon and earned the title of marathoner-a title not many people have. Momma still has her medal to this day and completing that marathon remains one of her biggest accomplishments.  I didn’t know it then, but this is where my interest in running/racing began.

Over the past year, I have seen so many of my sweet friends complete various marathons and have watched from afar as they shattered the goals they set for themselves and accomplished something that they may have never imagined they would complete.  This past summer, my friend and “coach” noted that perhaps I should take that next step and begin thinking about my first full marathon.  It was a laughable suggestion and I had no interest in completing a full.  I know how I feel around mile 13 of a half marathon and doing it again in the same day was absolutely not on my radar.  But the more I thought about it, the more the idea grew on me.  Doing a full marathon would sort of “complete” my story.  I could do it and show myself that I’m capable of something greater than anything I have ever dreamed.  But I was scared and a marathon was a long dang way so I disregarded it.

Bryan wouldn’t let the idea die down and we continued to talk about it.  I knew that I would want/need somebody (obviously him) to run with me to get me through the race if I chose to sign up.  Coincidentally, Bryan suggested Flying Pig since it is one of his favorite races and because I already know the first part of the course having done the half earlier this year.  The idea became more and more tempting and I was sold once he agreed to pace me for every step of the way.  The deadline for the cheapest price was on Halloween and I was still scared stupid to even register.  However when I picked up my packet for the Farragut 13.1 race, my bib number was 262.  That was the sign I needed to bite the bullet and officially register.  Before going to bed I submitted my registration form and forked over the money to endure 26.2 miles of torture.  Getting my confirmation email was all kinds of scary and the reality of the beast ahead of me suddenly sank in. 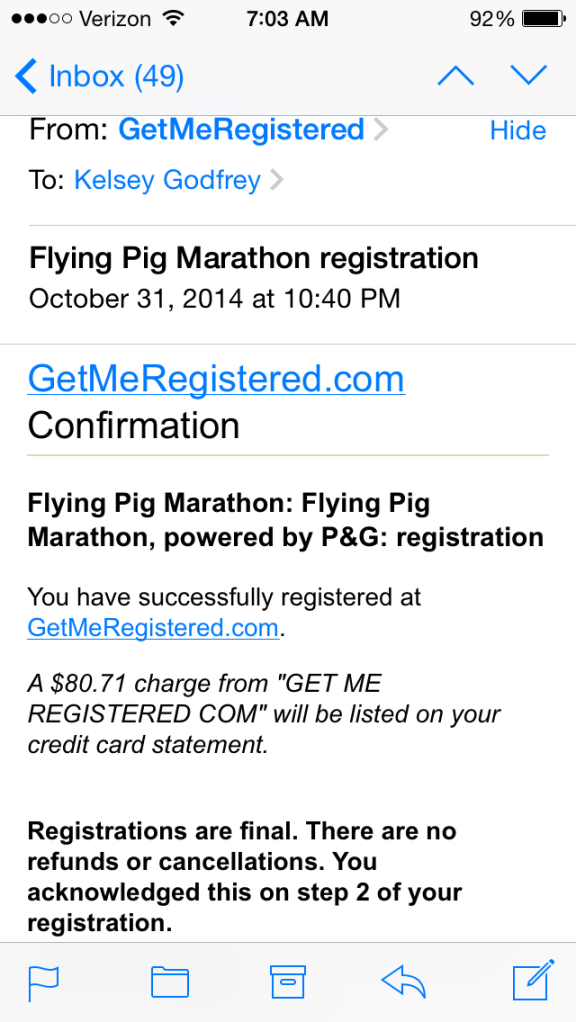 It is going to be a long training cycle for me since I have never ran more than 13.1 miles so I’m anxious to see how my body reacts and adapts to increased mileage.  I have full faith in my ability to stay dedicated and follow the plan that Bryan sets for me.  It won’t be easy.  It might not even be fun.  But when I cross the “Finish Swine” on May 3, 2015 it will all be worth it and I will earn the title of MARATHONER.  Crazy, I know.  Be sure to stay tuned for the torture fest I have in my future and see how training goes for me.  I vow to be honest about my feelings throughout training and to share all victories and defeats that may come my way.  It will be fun, right?

Speaking of marathons, let me tell you about another Mary.  I realize that I’m a little late to the party from posting about Halloween, but better late than never.  While Halloween is not one of my favorite holidays, I really enjoy scrolling through my Facebook feed and seeing my friends’ children dressed up in their costumes.  It is a lot of fun to take on another persona for one night.  Like last year, we had a trunk-or-treat event at my church where members handed out candy from their cars.  I had pinned a Mary Poppins costume to a Pinterest board earlier this year that I tucked away for this special occasion and I must say that it turned out very well.  The best part was that every piece of my outfit/costume is something that I already had in my closet so I didn’t have to spend a dime.  I was also surprised that my beautiful friend’s daughter was also dressed up as Mary Poppins.  We really rocked the “spoon full of sugar” look.

Have any advice for a first time marathoner?  Did you dress up for Halloween?

13 thoughts on “Marathons and Mary Poppins”