As someone who is racing the states, I try to find races that are geographically convenient to where I live as well as factor in the price.  When a friend from a local running group suggested I join her and one of her friends on a quick weekend race trip to North Carolina, I didn’t need any convincing.  Downhill at Dawn was held in Ridgecrest, NC which was less than a 2.5 hour drive for us.  We made the trip up on a Friday and spent some time shopping at discount stores and outlet malls.  The start takes place at the Ridgecrest Conference Center and fortunately they have several housing options directly on campus that are also tax exempt so you don’t have to pay extra for fees.  We had a little dorm that was directly next to the start line (see photos below) and since it had one big bed and two sets of bunk beds then we each got our own sleeping area.  I will note that the bathrooms are very small and there is no TV in the room so be aware of that if you plan to do this race. 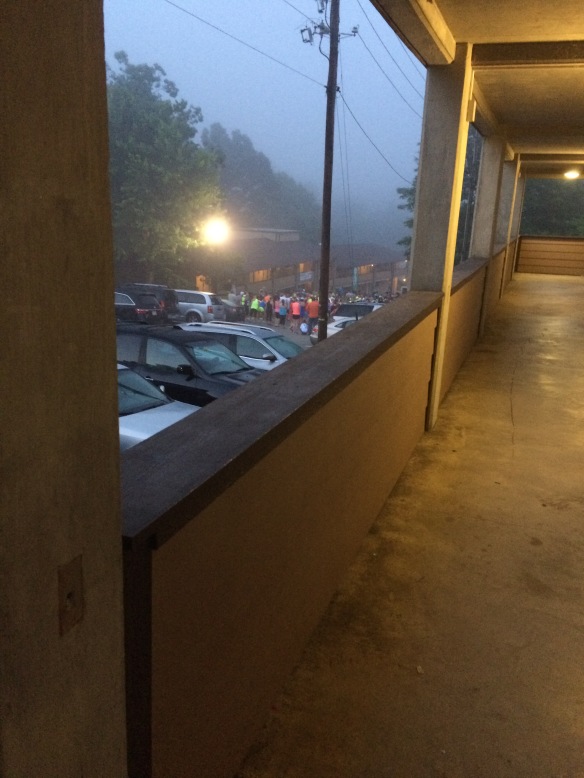 There’s the start line from our room.

We ate at an Italian restaurant for our pre-race meal.  I had pizza (judge me) and it seemed to sit okay on my stomach.  The race began at 6:01 so we had to be up early but it was SO nice having the start line literally right outside the door so that you could take as long as you needed to get ready and then use the bathroom one last time.  I headed to the start at 5:57 and had plenty of time.  Such a rebel, I am.

I stayed near the back because I knew this race would take me quite some time since I had only ran once since the marathon and that run was a race.  We started and I expected lots of downhills since the name has downhill in the title.  I was wrong…BUT I did look at the elevation chart so I knew they were eventually coming.

can you find me??

The first couple of miles featured an out and back section so I was able to stay distracted by looking at the other runners and cheering for them.  I met two super nice Half Fanatics.  One ran up and high fived me as he was doing the “back” portion and then I was able to walk and talk with another for some time.  Around mile 4 the race begins to go downhill which was such a relief.  I was scared they wouldn’t come.

After going downhill on a main road for a bit, we cut onto this gravel/sandy road to continue the downhill portion.  Jennifer had warned me about this so I was expecting lots and lots of gravel but it was mostly compacted sand which was a welcome relief to my legs that were hurting.  Since we were in the mountains there was a lot of shade so I never really felt the sun.  I was sweating buckets but at least the brutal southern June sun was not shining on me.  I wish I could remember the exact point but around mile 9 it started to flatten out.  I enjoyed the change of pace and continued to do a walk/run although there were no set intervals.  I tried not to look at my watch because the last thing I needed during the race was pressure but I did become increasingly convinced that I was not going to make the 3 hour time limit.

There were aid stations about every two miles and the workers at them were FANTASTIC. So nice and fun and motivating.  I’ve never been the type of person to wish for a certain type of drink on a course because I’m just thankful that they have hydration at all, but the orange Gatorade they had was the BEST thing I have ever put in my mouth.  Maybe I was delirious but mannnn it was so good.  My stomach never felt “bad” but it didn’t feel enough to handle one of the two gels that I packed in my belt so I decided to solely rely on liquid as my fuel source.

running next to a geiser

I saw a dead snake at mile 11 which was a little scary.  A quick glance at my Garmin told me I was good on time and before I knew it I was making the turn onto the sidewalk to head to town.  Eventually I saw the finish line in sight and began to run a little faster.  My last two miles were the fastest of the day.  I crossed and grabbed my really awesome medal and immediately made my way to the food table.  I was desperately looking forward to chocolate milk but they ran out so I settled for some bite size Nutella packets instead.  Have you ever seen these?  They were the perfect size and I had to keep myself from grabbing a huge handful.

It should also be noted that since the race finished at a church, they had INSIDE bathrooms.  How many times does that happen after a race?  Almost never.  We waited in line for a school bus back to the start line but we got SUPER lucky and this fancy church shuttle pulled up that had cushioned seats and air conditioning.  It was wonderful.  Bonus: I had the front seat and no one sat next to me so I had lots of room to stretch out and rest for the trip back up the mountain. 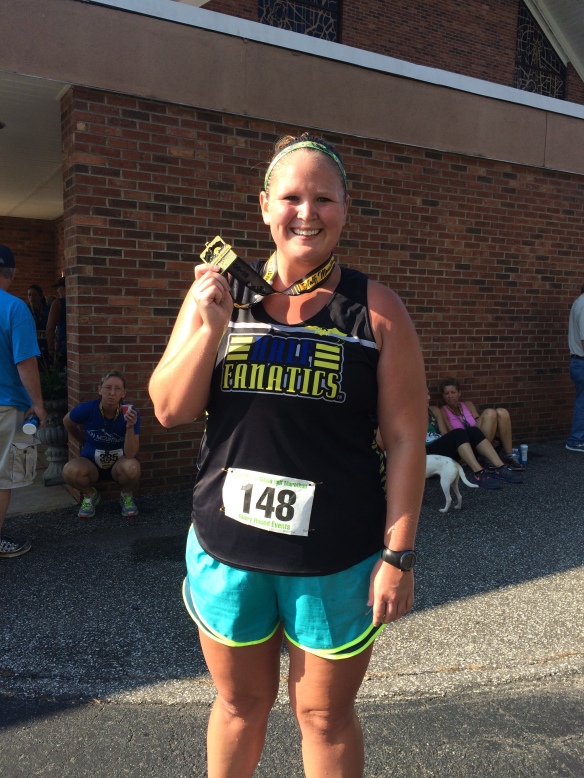 My final time was 2:45:29 which I was extremely proud of. I had told my travel partners to start looking for me around 2:45 and I totally nailed it.  What’s crazy is that for so long I tried to get under 3 hours at a half marathon and was never able to and now I feel as though I’m in the worst shape of my life and I know I’m at my heaviest weight yet I still did a 2:45:29.  Not too shabby although I have lots of room for improvement over the next couple of years.

If you need a NC race then I highly recommend this one.  It may be completely in the boonies but it was great in terms of being next to the race start and just general race hospitality.  Thankful to have state 8 under my belt and to have completed 20 half marathons.

1 thought on “Race Recap: Downhill at Dawn Half Marathon”