Since Tennessee is such a short state in terms of vertical mileage, I try to find races that are close(r) to home so that I can drive to them as much as possible.  Virginia is a neighboring state so I knew that I should try to get it done as quickly as possible in order to knock it out.  Unfortunately, Virginia is a longer state so I had to do some research to find one that was within reasonable driving distance.  The Hokie Half Marathon caught my eye and after reading some recaps from other blogs, I decided to do it.  It would only be a four hour drive from my house, making it very convenient.

The dance team that I coach for had a fundraiser breakfast on Saturday morning that I had to attend, so my dad and I headed out early Saturday afternoon.  We had planned to roll into Blacksburg, Virginia around 4:30, pick up my race bib, grab some dinner, and relax the rest of the evening.  Things don’t always go as planned.  After stopping for gas about two hours away from Blacksburg, my dad noticed that my tire looked funny.  Much to my disbelief, I had a massive rip in it.  It’s a miracle it didn’t blow driving down the road.  I quickly Googled some tire stores nearby but none of them were open on a Saturday afternoon.  We decided to try and make it to a Wal Mart about 55 miles away which we fortunately made it.  Getting a new tire took about an hour and a half so I shopped around a bit, bought some snacks for the hotel, and we just sat around.  Not how I imagined the road trip going, but I’m just thankful that we weren’t hurt or stranded along the interstate.

Packet pickup was held at an awesome high school in Blacksburg.  Seriously, it was at the most beautiful location.  They even had a sweet cross country course with mileage markers mowed into the fields surrounding it.  Pickup was easy and painless.  They had ran out of shirts by the time we got there, but they said they would order more and mail me one.  Hopefully they follow through with this as the shirts were really cool.  We had just missed the Hokie Bird mascot, but I still took advantage of the photo board to take a pre-race selfie.

We headed to downtown to grab some dinner but couldn’t find parking.  After driving in circles for what seemed like forever, we called it quits and went to Chick-fil-a.  I really failed on finding a hotel early so we were stuck staying about 30 minutes from Virginia Tech.  Our hotel was great and I was able to fall asleep relatively early.

On race morning, we had two options.  I could either ride the bus from VT to the start line, or have my dad drop me off at the start line.  I was worried about congestion and I wanted a little extra sleep, so we opted to have my dad drop me off.  I will say that they utilized charter busses instead of school busses for drop off which is a nice luxury.  Even with drop off, I still got there early.  I was able to use the bathroom (no lines!) and stretch a little.  I was nervous since I’m about 50 pounds heavier than I would like to be and because of my finish last week at the GSM Half.  I knew the course would be extremely hilly so I decided that my strategy would be to power walk all that I was able and then to run on any downhill portion.  The race began on an uphill and the entire race remained fairly hilly.  I kept a very strong walking pace and made sure to slowly run down any downhill portion.  This race did have some downhill, but the majority of downhills were either super short, or a long slow decline that made you even question if you were going downhill. 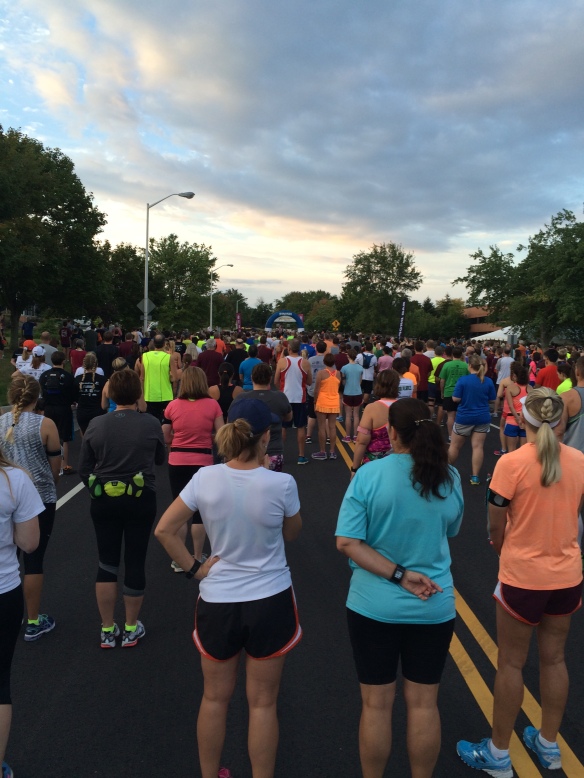 The course support was amazing.  There were cops at every single turn along with at least two of the VT’s military program.  They yelled, hollered, clapped, cheered, cowbelled, high fived, and jumped the entire time.  We had names on our bibs so most volunteers called us by name.  It’s the little things, ya know?   Even the cops were yelling for us and running to high five us.  I felt like a superstar…even at the back of the pack.  Water stations were well manned and I was glad that they had signs up way before the water stops that stated which side water would be on and which side Gatorade would be on.  This really helped with the confusion that is sometimes caused with water stations.

This race had many different types of scenery.  We ran around the research campus, we ran on the highway, we ran around the parking lot of a shopping mall, we ran on a greenway path, we ran in a woodsy area (on pavement), we ran on a greenway that was split with runners come back for their final miles, and we ran on country roads next to corn fields.  I felt like I always had something to look at.  On the out and back portion, the runners near the front who were finishing their mile 11 while we were still on 8 or 9 were PHENOMENAL.  Almost every single person either said good job, gave me a high five, or a thumbs up.  There was so much encouragement from other runners which is something you rarely experience since everyone is so busy doing their own thing.  This was probably my favorite part of the race.

After mile 11, we were exposed to the sun and it was beating down hard.  Being on asphalt and wearing a black tank was not helping any.  I stopped for fluid at the mile 12 water station and then pressed onto the finish.  I knew my dad would be waiting so I wanted to finish strong since he doesn’t get to come to a lot of races.  There was a massive uphill before the downhill finish.  I was able to run strong through the finish.  Once in the chute, I collected my finisher’s shirt, medal, and magnet.  This was the first race I ever got a finisher’s shirt at so it was a pretty neat experience. 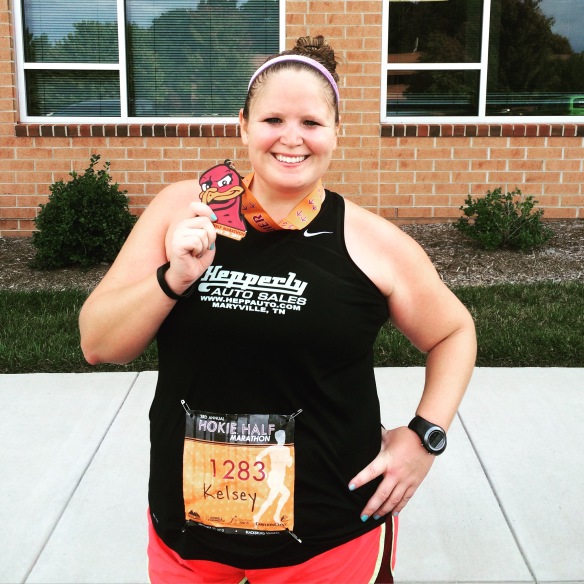 Immediately after finding my dad, I began to feel sick. As usual, the only relief I found was laying down. I was able to find some shade near the food tent while my dad got me some Gatorade and some food.  They had an assortment of chilis, but my belly couldn’t handle hot food on a hot day.  After a quick rest, I grabbed some candy from the candy table (BEST IDEA EVER!!!) and headed to the car.  My dad was the best spectator ever as he found a parking spot that was ridiculously close to the finish.  We were able to get back to the hotel, clean up, and head home.  My belly still didn’t feel right, so I snacked on some Goldfish the car ride back. 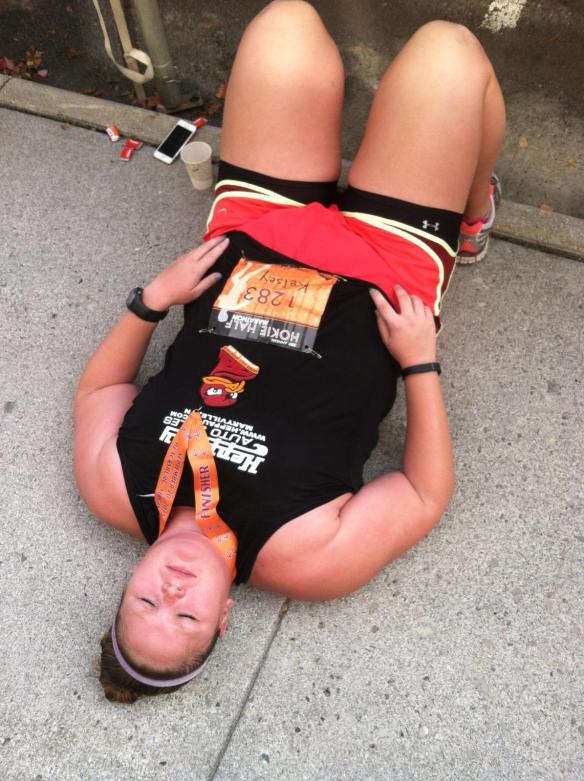 thanks dad for this lovely photo.

Final results haven’t been posted, but my watch says I crossed in 3:08:46 which would be 21 minutes than my half marathon last week.  This surprised me given how much I walked combined with heat and hills.

Overall, this was a great race experience.  It was well organized and downright fun.  While the course had a lot of tough hills, the support and energy more than made up for it.  This is a great race for anyone looking to run a race in Virginia.

1 thought on “Race Recap: Hokie Half”