For the past three or four years, I have had it on my bucket list to volunteer at an Ironman event.  Don’t ask me why because I really do not know, but for some reason it was just on my heart to be a part of such a legendary event.  2014 was the inaugural year for the Ironman coming to Chattanooga and unfortunately I couldn’t be  a part of it that year.  When the 2015 date was announced, I made it a point to put it on my calendar.  After checking with our Chattanooga friends as to whether or not they would want to be a part of it, I signed up.   There were a ton of different jobs and time frames to work with, but both Brittney and I decided that we wanted a morning job that put us in direct contact with the athletes.  We chose to sign up for sunscreen for T1, meaning we would be lathering sunscreen on people before they hopped on the bike.

Since the race wasn’t until Sunday, we made an entire weekend out of visiting Chattanooga.  We ate at some great restaurants, visited the aquarium, rode the River Gorge Explorer boat, and made sure that we watched the Tennessee football game. 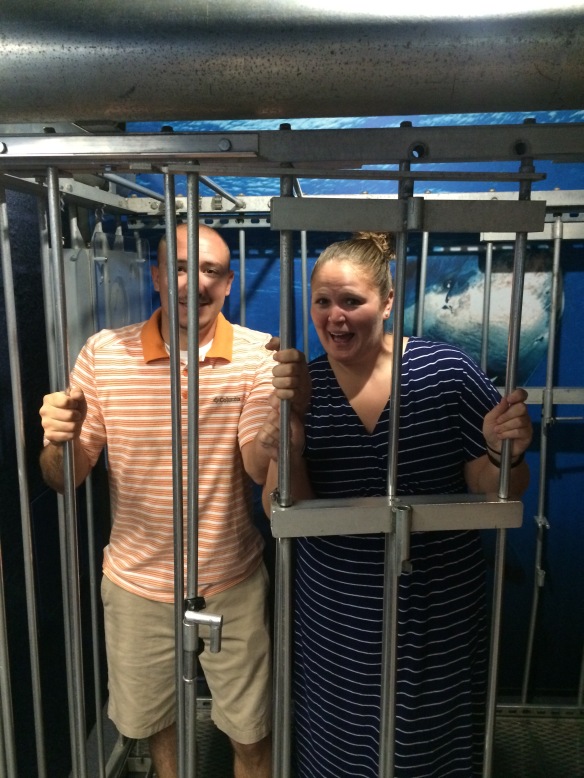 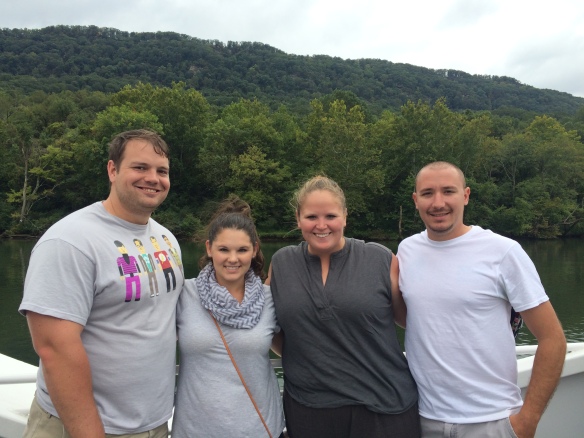 Saturday morning we went downtown for the volunteer meeting so that we could check in and get our volunteer shirts.  I love free shirts!  It was very informal and we encountered lots of athletes along the way who were their to drop off their gear and check in.  We were told to come back the next morning with a smiling face and readiness to work.  No problem for us. 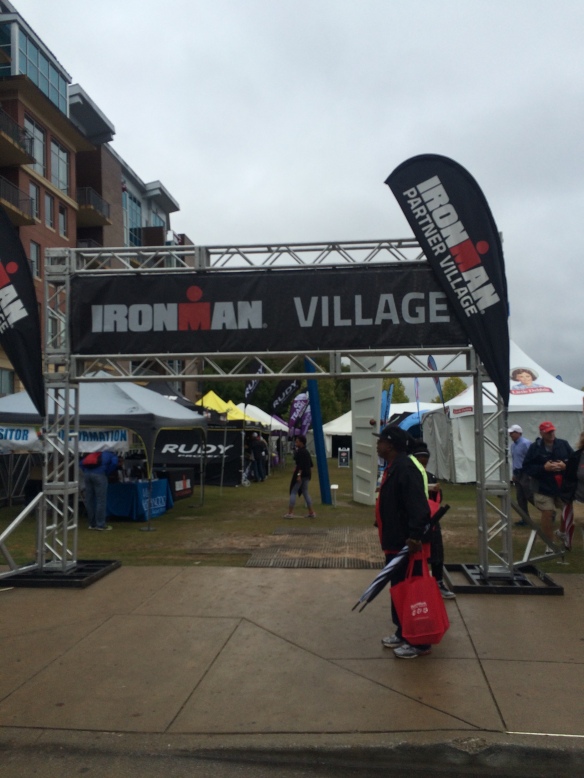 On race morning, we left Brittney’s house super early to get downtown, parked, and to the race site.   We took the electric shuttle and met a super nice woman whose husband was doing the race.  They were from North Carolina and she told us all about his training and how much he put into it.  We gave her some suggestions for food after he had finished to celebrate.  After getting off we wished her husband good luck and that we would be on the lookout for him.  From there we went to the changing tents and helped get our sunscreen tent ready for the athletes.  The sunscreen came with pumps but that would not be practical so we had to dump it into casserole pans.  It was the strangest sunscreen I had ever seen.  It was a weird yellow color with a snot like consistency. 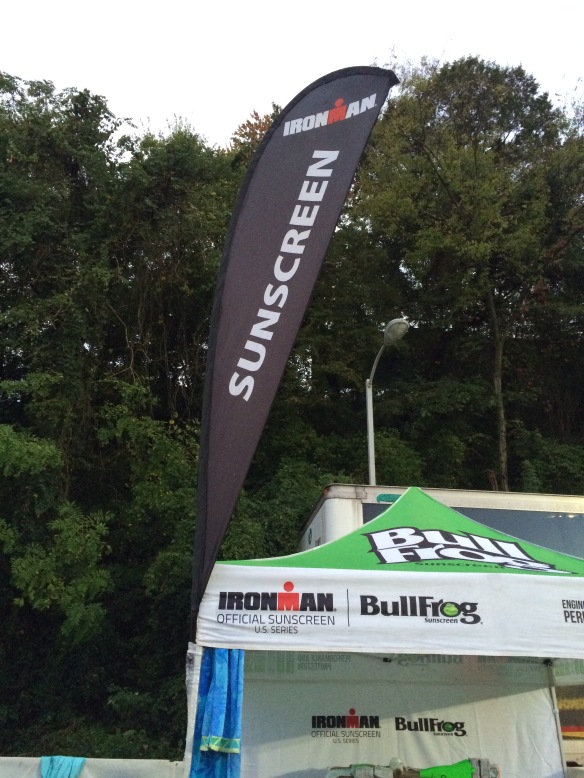 Prior to the athletes began rolling in, we had a chance to talk to our fellow volunteers.  Most of them were volunteering so that they could get priority registration for next year’s event.  Of course we were just there for the experience.  Some of them gave us pointers on what the athletes like and don’t like so we tried to maintain their advice. 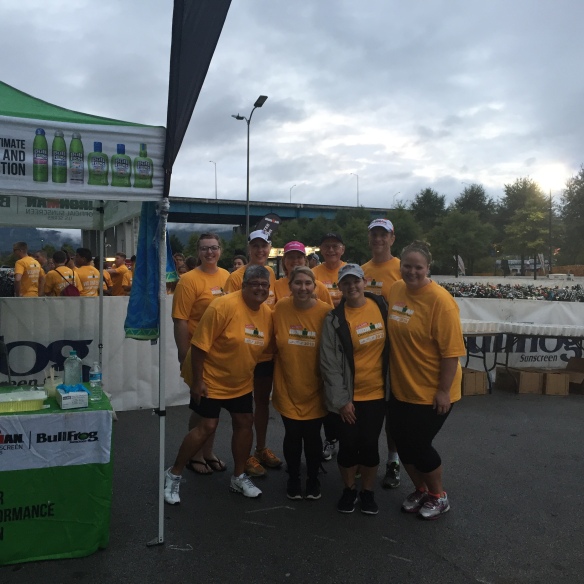 Before we knew it, our first athletes were running through transition and we were ready and waiting with our rubber gloves and snotty sunscreen.  They were obviously the pros and were in and out of the changing tents in a ridiculous amount of time.  It was so impressive.  None of the pros wanted sunscreen but we still cheered like mad people and hollered for them.  I never get to see the front of the pack in an event unless it is an out and back course so it was so surreal to see these guys totally dominating.  Once the age groupers started rolling in, we were busy busy.  People would come to us and it was all we could do to lather them up really well and get them on their way.  For some people, we had to literally run with them because they refused to actually stop and waste precious transition seconds.  A lot of people wanted it everywhere so we would tag team it by one person doing shoulders and arms and another person doing their legs.  We got VERY personal with a lot of people.  Since they were still wet from the swim, it was hard to apply sunscreen since it wouldn’t rub in, but we did our very best.

Almost all of the athletes were extremely grateful and kind.   I wish I had a GoPro and could have recorded the entire experience because there are so many different stories to tell.  One lady didn’t know she was chafed on her neck from her wetsuit so when a fellow volunteer slapped some sunscreen on that spot she started screaming uncontrollably and cursing and jumping up and down.  It scared us so badly so one volunteer tried to blow on her neck but it didn’t help.  I can only imagine the intense pain she was in.  Another dude said “HEY WHAT A COOL PARTY” and was dancing the entire time that we were lathering him down.  Some people were grateful for the “massage” that we gave their legs while applying sunscreen there.

I felt so bad for this one poor dude I helped…he had his body markings with something that was obviously not a Sharpie so as I was putting on his sunscreen, I totally made both of his arms black from where the marker ran.  He had to go to the tent to towel off and have his body markings redone.  I felt awful for potentially ruining his race but there was really nothing I could have done differently.  Another dude only wanted it on his nose but his helmet made it super hard to get to so I accidentally poked my sunscreen glove in his eye.  I know that had to hurt, but I was just trying to help.

The lady we met on the bus ended up coming to the spectator area by the sunscreen line and Brittney and I were the ones who got to put the sunscreen on him.  That was super cool since she had told us to look for him.  One guy had just done an Ironman two weeks ago and was doing another one.   I wish I could have had a conversation with every athlete that we helped but of course that was impossible.  I’m just happy to have had the opportunity to experience such a monumental event.

After our last athlete came through, we went home to change, eat lunch, and we ended up coming back to downtown before our river boat tour to watch some people in transition.  The pros were already coming through the transition to start their run.  We were able to see several of the pros and even a few age groupers come through before heading out to the run.  The run portion also ran right by where our boat was, so we saw several people starting their journey to the finish line.  It was amazing!  When our boat cruise was over we headed over the river and were able to see a ton of athletes running on the walking bridge.  They were moving so fast which truly blew my mind.  I was amazed at how many supporters people had there to watch them.  Many families and friends had shirts made, special signs drawn, and even those big heads on sticks of their athletes.  Although it did not put the desire in my heart to ever complete one, it was still so cool to watch happen.  We were even able to watch some people finish.  There was a 2 second difference between the first and second place finishers-literally the closest in Ironman history.  Although we didn’t get to see it in person, the video will about make you cringe because it is SO close.  Very cool moment. 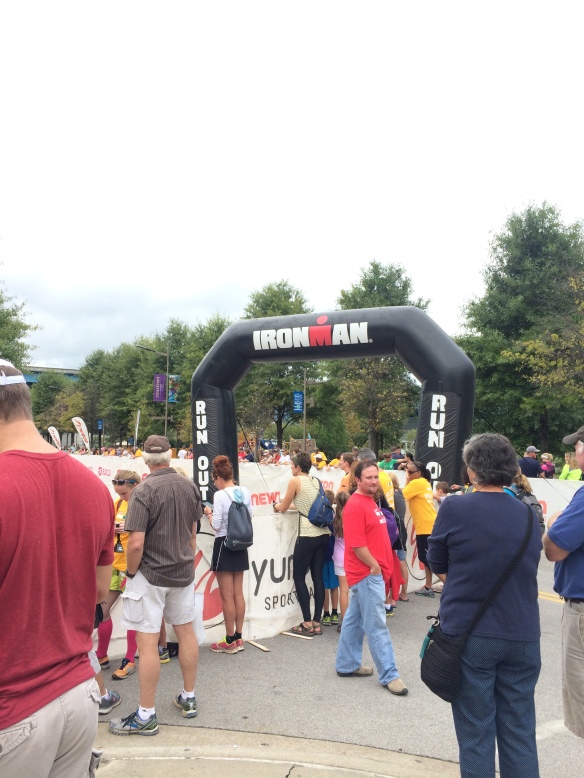 I would love to have been able to volunteer for more than one position or to have been around to spectate all day, but of course that is hard since I do not live in the area.  Maybe next year.  In the meantime, I’m so happy to have gotten to experience the wonderful event that Ironman is and to see firsthand the hard work that goes into it.  Those athletes are true champions and warriors.  If you ever get the chance to volunteer then PLEASE  do it.  I promise you won’t regret it.

5 thoughts on “Volunteering for Ironman Chattanooga”