NOLA, baby! This wonderful city has been on my travel list for quite some time, so I just HAD to sign up for the Rock n Roll race that was held at the perfect time.  Fortunately for us, I have some super sweet friends that live outside of the city in Slidell so we were able to stay with them and make a long weekend trip out of it.  We left right after work on Friday and made the 9 hour drive South. Whew, that was a lot of car time.

Saturday morning we slept late and headed to the expo.  Our friend’s husband actually works at the convention center so we were able to use his parking pass and walk right into the expo.  Packet pick up was super organized as usual.  I was able to quickly pick up my bib and t-shirt and visit all of the booths that seemed interesting to me.  As much as I love expos, there comes a point where if you have seen one then you have seen them all.  I did make my way over to the VIP booth to pick up my wristband for race day.  The sweet girl working it told me that I had to be parked and on the bus by 5:45am the next morning which kind of alarmed me, but it ended up being perfect timing on race day.

We rode a street car over to the French Quarter and made our way through all that is New Orleans.  I loved being able to see all of the different vendors in the French Market, going inside during Mass at St. Louis Cathedral, eating some red beans and rice at a local eatery, seeing Bourbon Street, watching the Dragon Master Showcase street performers, and eating at Cafe du Monde.   Basically everything that was touristy-we did.  It was soooo warm outside which was delightful given how cold it had recently been back home.   I truly felt like we got to experience all that is New Orleans. 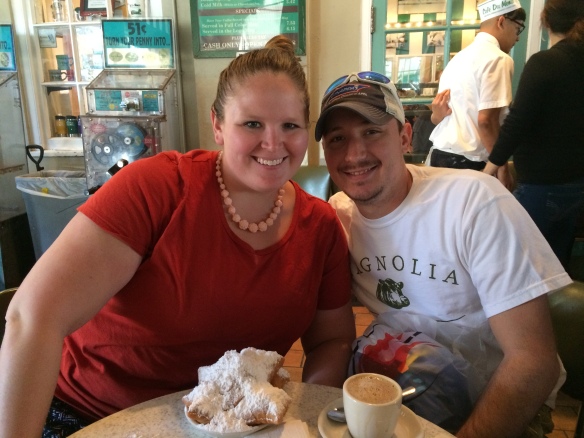 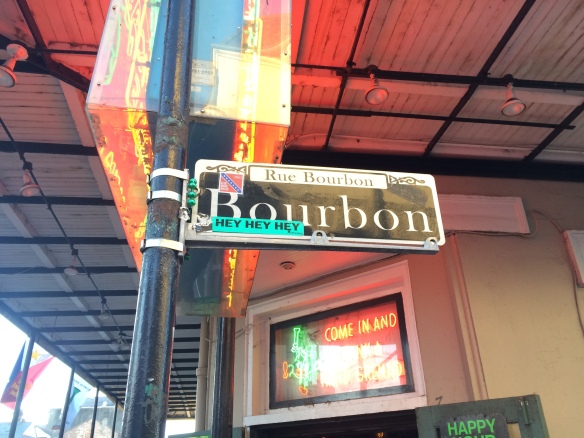 I got in bed super early that night.  Unfortunately I woke up several times during the night but I think that is common with me and my race nerves when I am away from home.  I woke up easily to my alarm on race morning and got ready in the dark since TJ was still sleeping.  Before too long we were on the road to make the drive into downtown.  We found our parking lot super easily and after a quick goodbye I boarded the comfy charter bus that would drive us to the host hotel for the VIP experience.

This was my first time doing VIP for a race, but I was super happy I signed up for it since parking can be somewhat of a nightmare and I really really really did not want to be shuttled back to my car after the race.  The VIP room was on the third floor of the downtown Hilton.  They had a wonderful breakfast spread which I was so thankful for since I left my normal pre-race PB sandwich sitting on the counter at home.  I grabbed a bagel and some peanut butter and grabbed a seat at a table.  The people sitting there didn’t really talk much but once they left the nicest woman ever sat down with me along with her husband and we had a great pre-race chat!  They, too, were race the states and we had sooo much to talk about.  Hi, Dianna! 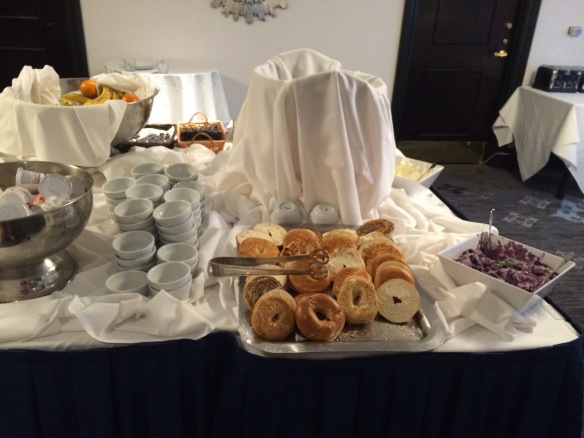 The best part about VIP was plenty of clean indoor bathrooms.  I’m not above using a porta-potty but if given the choice I will gladly take no lines and indoor plumbing all day long.  Since my corral wasn’t near the front, I didn’t even leave the hotel until a little after 7:30 (race start).  I slowly made my way to the start line and took in the crisp morning air and prepared myself for what was about to happen.

Finally I saw my corral and hopped right in.  The crowd support near the beginning was amazing.  High fives were everywhere and music was blaring. I had planned to walk the entire race and that is exactly what I did.  We did a really long out and back on one street and I was amazed at all the sights and sounds.  Tons of people out supporting their runners, bands playing, beads hanging from trees and electric wires. It was amazing and was also a welcome distraction.  I carried my GoPro in my hand and made tons of video clips during the race that I would later turn into a movie to remember my trip.  I saw lots of “touch here for power” signs that I promptly smacked.  Before too long, the people on the opposite side of the street were coming “back” so I was occupied watching them.  So many people out there enjoying life and reaching for their goals.  I felt completely fine the entire race…no stomach pain at all which is rare for me.  For some reason, lots of people passed me and offered encouragement, high fives, thumbs ups, and pats on the back.  I totally appreciated it because I love those kind of things but I did wonder if maybe I looked bad or looked like I was failing or something.  Regardless, shout out to my fellow racers for being so gosh darn nice!

Around mile 11 my feet began to hurt.  I knew I was getting a blister on the ball of one of my feet and they just hurt in general.  This is nothing new to me so I just kept listening to my music and pressed on.  I enjoyed being surrounded by supportive people and there was still so much to look at…NOLA truly is a gorgeous place!  Before I knew it, I was inside the gates with the finish line in sight.  I looked everywhere for TJ and took time to high five people who had lined up outside of the chute.  The finish line was in a city park with beautiful trees everywhere that offered plenty of shade.  Once I crossed the finish, I got my totally awesome medal.  I loved that instead of a ribbon they actually used Mardi Gras beads…completely terrific for that race.  I was able to grab some Cheez-Its and an ice cold bottle of water and make my way out of the finishing area.  Thank goodness the chute wasn’t super long like it was in Vegas.

I still couldn’t find TJ so I made my way over the to the VIP area.  As soon as I walked in I was greeted by my friend Dianna that I met earlier in the morning.  She said that her and her husband saved me a seat in the shade which was so super nice of them.  The VIP tent had a nice selection of food options.  I settled on some rice and chicken with a big old brownie.  We sat and chatted about the race and our experiences.  Surprisingly I still felt well and had absolutely no stomach pain or light headedness.  Again, super rare after a finish.  After about half an hour of good food and conversation, I left my new pals and went to find TJ.  He was patiently waiting for me and  ended up realizing that he was lined up at the marathon finish line and not the half marathon one.  Oopsies.

We made our way back to Slidell and I let my feet have a nice long soak in the pool.  It was blazing hot by this time and I was glad to have some cool relief.  We completely vegged out on the couch the entire day.  Our host family made a huge pot of gumbo that kept us full all day while we binge watched Law & Order: SVU.  I took the Monday after the race off so we made one more trip into the city to eat at Cafe du Monde and to get some pralines to take back home.  Monday was incredibly humid and I made mention to TJ that I sure was glad that  the humidity spared us on race day.  We had a long drive back home, but of course we stopped in Chattanooga to visit our sweet friends Brittney and Cameron and to grab some dinner with them. 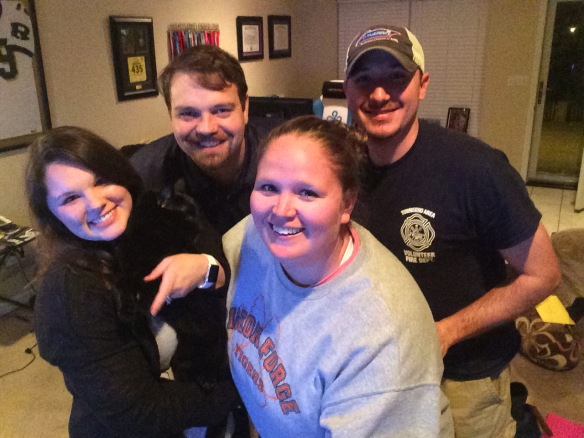 Overall it was a great race and I’m so glad that I was able to knock off another state while exploring such a diverse and culturally rich city.  Both TJ and I agreed that we would love to visit NOLA again and I know for sure that I will recommend Rock n Roll New Orleans to ANYONE because it was seriously such a great race.