Our local track club puts on some great races in the Knoxville area and I love finding a good race that I can do again and again year after year.  This was my second year running Strawberry Plains 10k and only my third 10k to date.  In the days leading up to the race, Brittney and I had several conversations on how we wanted our race to go.  We both wanted PRs but we weren’t sure exactly what number to shoot for.  For me, it would be anything faster than a 1:13:30 and for her it would be faster than a 1:07.  It was decided we would just go with the flow and run what we were capable of although we both secretly set our “A” goal for a 1:05.  The night before the race I wrote down all the split times we would need to hit or come close to in order to meet that goal.  I ended up forgetting it at home but oh well.

Race morning came and I was a ball of energy.  It was nice having my handsome fella drive my Momma and I to the race because we were able to relax a little bit.  The race is held at a school and fortunately there is ample parking so once we found a spot it was not far at all to the packet pickup area.  Being at a school also meant we had inside warmth AND inside bathrooms.  Score!  We met up with Brittney and her husband and mingled about talking to people we knew including one of my good friends from grad school class who signed up.  The Biggest Winner team was also doing the race as their first 10k so it was great chatting with them and getting them pumped for the day ahead.  Since Brittney’s husband was not running the race, him and TJ were on photographer duty and they did a mighty fine job.

I’ve never been one to “warm up” before a race but before it started Brittney and I hit the road for a quick little jog to get our muscles moving.  Maybe that was a foreshadowing moment on a great race that awaited us. We hopped in line in the back and with a quick GO, we were off.  Right as we crossed the start line a super sweet woman named Karen ran beside us and told me she reads the blog!  It was so cool to meet someone who reads here AND she said she is doing a triathlon this year, too.  Hi Karen 🙂  Brittney and I held our pace quite well through the first mile and our split was right where it needed to be.

The race is slightly hilly but in a good way because for every up there is a down.  The hills weren’t steep although it did take effort to go up them.  Surprisingly we maintained conversation throughout the race which is something I would never have been able to do about two months ago.  We hit our second mile with the same consistency as the first mile.  Shortly after the 2 mile marker we began to see the runners who were coming back from the out and back.  This was super entertaining because we got to yell “GOOD JOB” at almost every person who passed by.  It also offered a nice distraction so I wasn’t overly concentrated on running. After the turnaround I told Brittney that this was the farthest I’ve run without stopping in almost a year and a half and there was NO stopping us now.  This part was even more fun because we got to high-five all the people behind us including those on the Biggest Winner team.  It was seriously so fun.  We even passed my sweet Momma who was nice enough to take our only course action shot.  Brittney and I both noted how far up in the pack she seemed to be.

Around this time I had planned to take a walk break at the four mile marker because my mind didn’t think it was capable of doing any more than that distance. Boy I was wrong because with a little encouragement I was still going and didn’t stop to walk.  We even ran up the biggest hill on the course and it didn’t stop us.  I really couldn’t believe that we had run this far without stopping and ran up the hills and maintained a good pace.  All our hard work was actually paying off.  Shortly after the 5 mile marker we did take about a 20 second walk break up a little steep hill and then ran strong to the finish.  I could feel us picking up our pace but since the school/finish line area was in distant sight I refused to look at my watch.  As we rounded the corner we both really picked up the pace and finished super strong. Brittney finished about two seconds in front of me since she is a speed demon.  Our men were waiting with flashing cameras and bottled water.  The race clock said 1:05:59 when we crossed and after checking official results we had completed it in 1:05:22 which is an EIGHT MINUTE PR!!!  We both kept repeating to ourselves that we hit our goal.  It was really unbelievable but looking back it should have been believable because we have been working our butts off to get stronger.

We stayed at the finish line to cheer other runners on and wait for the Biggest Winner team.  My Momma crossed in 1:27 and maintained a 14:01 pace during the race which is phenomenal for her!  She got emotional crossing the line as did myself and TJ.  I loved watching people crush their goals and show so much triumph at the finish line.  It was a great thing to witness.  Paige, one of my favorite bloggers found me at the finish and we *finally* met in real life.  She is just as sweet in person and it was so great finally getting to talk to her!   We slowly made our way inside to listen for awards which of course we didn’t win but it was nice to sit inside in the warmth and recap with our friends.  The race had homemade waffles, soups, and a ton of great snacks but I was too wired to eat anything but it was nice they had so many gourmet options. 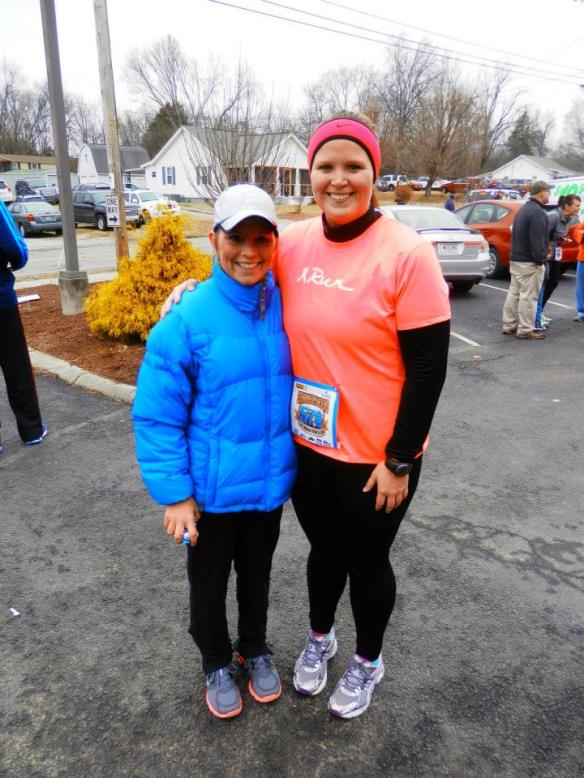 Before leaving we waited around to see our training plan master, Bryan, finish the half marathon.  A few more pictures later and we were on our way home.  Again, it was nice to have a chauffeur to be able to unwind.  I would like to say I had a productive afternoon but really we all just laid around on the couch being lazy.  It was well deserved.

Overall it was a fantastic race.  I loved the course, the people, and the weather was perfect.  Brittney and I really put our training to the test and it worked and we both came out with PRs.  It is crazy to think I ran 8 minutes faster than last year.  Our splits were also super consistent which is something that I have never been able to master: 10:34, 10:33, 10:34, 10:48, 10:39, 10:42, 1:34.  That is about as consistent as it gets.  I’m so thankful to Brittney for running with me and to the race organizers.  Also I’m so proud of my Momma on her amazing finish and the entire Biggest Winner team for reaching their goals.  Now, to work on PRs in every other distance.